Anything on the news and elsewhere in the media with evidence of digital manipulation, bogus story-lines and propaganda
Post Reply
First unread post • 1079 posts

As European countries battle to limit the spread of the virus, Verein Sterbehilfe – the German Euthanasia Association – has issued a new directive, declaring it will now only help those who have been vaccinated or recovered from the disease. In a statement, the association said:

“Euthanasia and the preparatory examination of the voluntary responsibility of our members willing to die require human closeness. Human closeness, however, is a prerequisite and breeding ground for coronavirus transmission. As of today, the 2G rule applies in our association, supplemented by situation-related measures, such as quick tests before encounters in closed rooms.

The term '2G' meanwhile refers to a system which only allows free movement for leisure activities for the geimpft oder genese— 'vaccinated or recovered.'
https://www.spectator.co.uk/article/ge ... -customers
Top

What are the two latest 'variants of the "Covid virus"'?

Well, the first one was the "DELTA" variant.

Now, we have the "OMICRON" variant.

These books were researched, written, edited, published and marketed between 27 November and 2 December 2021. The name "Omicron" was assigned by the WHO on 26 November 2021. 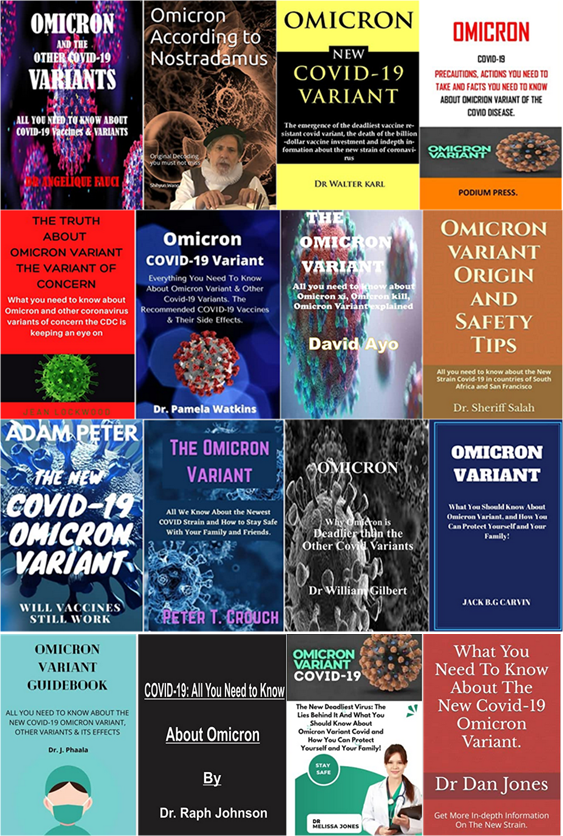 Lol - there are now more than 22 books about the horrific "Omicron Variant" to be found - on Amazon alone... 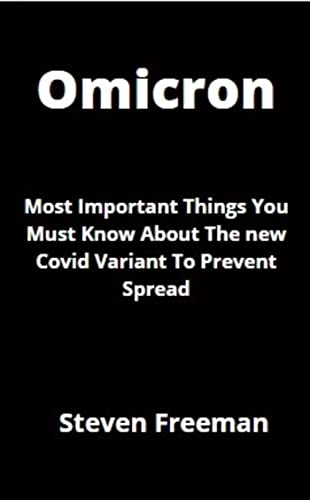 The book description goes like this:
"The point of this book is to improve and demystify the health intricacies, hazard, fundamental precautionary measures, and quiet realities that you really want to be aware of the new Omicron new variant of Coronavirus. By perusing this book you will arm yourself with important information to keep you and your friends and family protected and ensured."

Whereas this other book is only $65.03 - and hey, it's author is stated as "The Who Organization" - so I'ts gotta be the best value for your money ! 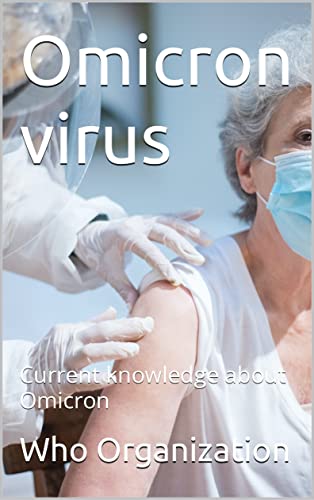 We live in a very silly world.

The Brazilian company Phitta has created a surgical mask that "kills the Delta variant", thereby ratcheting up their earnings by a factor of 25. While common surgical masks must be changed every 2-3 hours, the Phitta mask can be worn for 12 hours. According to the report, despite being surgical, the muzzle was adopted by Nestlé and Siemens.

I think I'll wait until a mask that can kill the Omicron variant becomes available. Sometime next week.
Top

These 2 videos are a tough watch.

They're about a 23 year old young lady coerced by her employer into getting the jab, and then having severe side effects. After she'd informed the jabber about her allergies.
Then coerced into signing a form absolving the jabber from any responsibilities.
The NZ Health system is trying to cover it up. Along with all the other victims suffering side effects of the jab.

I had the pleasure of meeting this courageous brave young lady, and her Mother last Saturday evening.
Sadly Casey's symptons appear to have worsened in the 3 weeks since this video was made.
We really are fighting pure evil down here. As the NZ Gov. proudly boast that nearly 90% of eligible NZers are double jabbed.

The second video is about the battles her Mother has endured in trying to find the truth.

Mansur wrote: ↑
Mon Nov 29, 2021 2:13 am
it is quite incomprehensible that Flabbergasted sees a connection between the propaganda ‘message’ and his own story that he shared with us. Where are the parallels?

Assuming you are honest about not getting the point, here goes:

1. I wrote here about how I personally know people who were vax injured, but, rather than warn others about the risk of serious hurt, go on to defend and promote the vax.
2. There must be some sad psychological or social explanation for this behavior.
3. This reminded me of the comics story I linked to in the post immediately following. The reason given by the woman in the story for not warning others is one out of many possible explanations for the type of behavior described in the first post.
4. Within the psychological perspective in which it was posted (and explained), it is completely irrelevant what the source of the injury is. The comment was not about belief in nuclear power, communism, space rays or viruses.

I trust we can leave that up to each reader. By the way, why was I demoted to the third person?

The apparent logic of your posts is of course clear to anybody, but:

That was you, dear sir, in whose mind this similarity or analogy arose (pushed maybe by some nostalgic feeling in the background – if a humble guess is permitted), now, in 2021, having already full knowledge about the nuclear things and propaganda in general for at least eight or ten years.

I am bound to assume that you would not hesitate, under other circumstances, to post such propaganda shit (hyping the nuclear scare in its tricky or ‘artistic’ way) in the nuke thread or so, or would judge to fit it there if another member were doing it. So, it seemed proper to draw attention to the ‘anachronism’ in the thing – and to the possible real ‘analogy’ it can bear concerning ‘sad stories’ shared with us even about medical professionals themselves.

(The way you sort out the words to be quoted of the post and the mode you interpret them has touched on something related to the topic of ‘honesty’ within me as well.

If you are absolutely certain of the ‘injury’ and the source of it, why do you cite that old ‘Cold War’ piece since there was then absolutely no real injury, not even for the show?)
Top 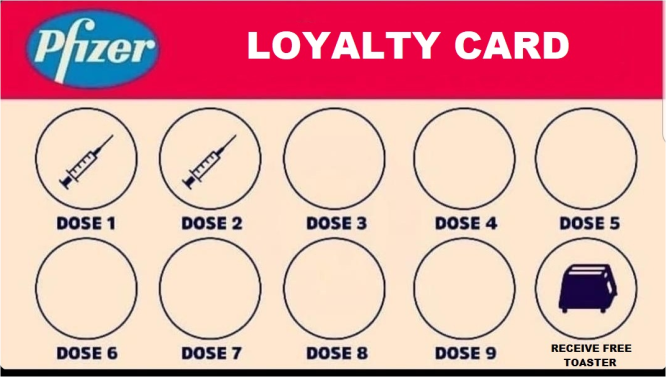 If you can survive ten shots, you deserve to get the toaster AND have your name inscribed in The Guinness Book of World Records.
Top

If you can survive ten shots, you deserve to get the toaster AND have your name inscribed in The Guinness Book of World Records.

Dear Flabbergasted, apparently, according to this report the record to beat is 10 shots in a day ....

A man who was vaccinated against COVID-19 up to 10 times in one day on behalf of other people has been called “unbelievably selfish” and sparked an investigation.

Astrid Koornneef, group manager of operations for the COVID-19 vaccine and immunization program in New Zealand, said the country’s Ministry of Health was aware of the issue and taking the matter very seriously.

A man who was vaccinated against COVID-19 up to 10 times in one day on behalf of other people has been called “unbelievably selfish” and sparked an investigation.

Astrid Koornneef, group manager of operations for the COVID-19 vaccine and immunization program in New Zealand, said the country’s Ministry of Health was aware of the issue and taking the matter very seriously.

Or encourage those that have taken the shot to keep taking the shots on a regular basis as well.


More BS, this from Russia of allegedly multiple vaccine intake....

‘I've had seven vaccinations against Covid-19 & I feel good‘ – Zhirinovsky

Vladimir Zhirinovsky, the leader of Russia’s ultra-nationalist LDPR party, has announced that he has received as many as seven vaccinations against Covid-19, offering himself up as an example of the safety and efficacy of jabs.

In the good old days, CF members called this ‘bad acting’. Let me join and try to keep this tradition alive. In those days posters didn’t forget to reflect on the interviewers as well. (Look at this media whore, please!) At the time, this 'emotional' ‘icon’ was used very often:

Whoever thinks that MSM is now forced to make such 'reports' because the trouble being so general and widespread and no more to be shut up entirely, he still looks I am afraid at propaganda activities through his tear drops so to speak.

In the girl’s video you can be confirmed that love and care make real wonders: in the end, when hugging, her hands cease to twitch. We aren’t simply looking at the scene but actually participating in it as it were.
Top

At least amongst the madness of these 'Covid' times a little creativity can be found, here is a song, I came across today, called Booster a modern day version of Alice in Chains Rooster which focused on the experience of a different type of war (Vietnam) then what we are literally in the midst of at present...

Belatedly, Brazilians are waking up to the vax tyranny and massacre and starting to fight back. An understanding of the deeper layers of the psyop, the entire PCR/virus/mask fraud, and the decades-long planning under the all-seeing eye of the central bankers, is asking too much at this point. The important thing is that resistance is growing exponentially. Three auspicious facts:

1. The State Congress of Rondônia (in the Amazon region) has just passed a law which makes it illegal to i) impose vaccination on any citizen, ii) demand proof of vaccination, iii) discriminate any person based on vaccination status, iv) deny anyone access to any public or private space or service based on vax status, and v) implement vaxports in any form. In other words, no coercion and no apartheid. This is what is already stated unequivocally in the Constitution, but since the worldwide 2020 abolition of the rule of law, fundamental and natural rights have to be reaffirmed by passing local laws. The new law is short and to the point, and will likely be copied by other state legislatures.

In Portuguese, but easy to translate electronically.
https://drive.google.com/file/d/1J3zo8t ... sp=sharing

2. The Federal Public Ministry of Brazil has just issued a 19-page legal opinion stating that mandatory vaccination and the introduction of vaxports are unlawful. It´s a significant step forward, considering the clout of this institution.

In Portuguese, but easy to translate electronically.
https://drive.google.com/file/d/1YHcC5E ... sp=sharing

3. Based on the flimsiest possible pretext, ANVISA (the Brazilian equivalent of the FDA) has just approved the Pfizer broth for children aged 5 to 12 years. A group of 45 medical experts submitted yesterday a formal petition requesting an explanation for this nutty decision. The 36-page request is very detailed and carefully referenced. An accompanying 37-page document lists hundreds of victims with medical information and links to the academic publications in which each case was reported. A very time-consuming job.

Lest I am accused by some member of being a virus hugger and defending medical half-truths, the above initiatives are merely examples of organized professional opposition to the vax tyranny and massacre. Different forms of resistance will be necessary in the future.

Note: Some important Brazilian government institutions are controlled by organized crime and global players, others are not. This makes it difficult to explain to non-Brazilians the internal war being waged. Some agencies, like the federal police, have a rotten wing and a healthy wing at the same time.
Top
Post Reply
1079 posts