Anything on the news and elsewhere in the media with evidence of digital manipulation, bogus story-lines and propaganda
Post Reply
First unread post • 34 posts

The accident took place two months after the September 11 attacks on the World Trade Center in Manhattan. Several factors, such as the date, aircraft size, airline, and location in New York, raised concerns that the crash was caused by another terrorist attack.[1]


We always ask "where were the real passengers? Aside from theories like a tone of them were fake names, some of them had to be real. Could it be this simple? Were the real ones killed in this accident that perhaps also included fake names?

How much do we know about the victims of Flight 587. Obviously not a lot of coverage about that like there was on 9/11. Maybe there should be more scrutiny.
Top

I found it amazing that they instantly concluded that "terrorism" was not to blame (within hours.) How could they be so sure so quickly?
Top

fred 4 Oct 8 2010, 11:39 PM wrote: I found it amazing that they instantly concluded that "terrorism" was not to blame (within hours.) How could they be so sure so quickly?

No, that joke doesn't work. After a ten minute scan about I'm far from sure that 'they' didn't do it...
Top

I made a very amateurish attempt at looking into to it a few years ago on another forum. There are some images missing of the flight data etc....

Very blocky and Shoppy, no?
Time and patience disallow a full breakdown, but is that guy doing an Irish jig?

Another savagely blocky and blurry pic, with ghostly image in the hedge.
Top

I really have no words. This all sounds so contrived - I cringe when I see these History channel 'reconstructions' - loaded with CGI imagery. But what do I know about Flight 587? Virtually nothing, I'm afraid.

However, it appears that THE ONLY ON-SITE IMAGES OF THE DISASTER the History channel proposes (at 0:12sec in the above documentary and once again at 7:36) last for a few seconds only. Why do they not show MORE footage of the real events on the ground?

One of the big Q's about that crash was how the passenger list looked like a 'Dominican telephone book.' Probably quite a lot of non-passengers in there.

After an hour or three browsing, finally find a vic pic. On a more respectful note, not posting the image directly just in case. Note the familiar and peculiar practise of taking framed portrait to memorial service.

No indication of the framed man's name.

Article states Kriendler and Kriendler are handling the compensation cases.

http://www.kreindler.com/ '...has joined forces with some... law firms...on the Gulf Coast to represent the interests of clients... from the B.P. Deepwater Horizon Oil Disaster.'

Why such paucity of victim information? Big case, lots to see lots to do...
Top

So the "victims of 9/11" that likely didn't exist are being transfered to other disasters because 9/11 failed so miserably to convince?

Let's propose that the "victims of 9/11" were all sent on a rocket to the sun while we're at it.

This Flight 587 should be treated as a separate case from 9/11 and not get any attempts to tie it to 9/11 for no particular reason.

I value far-thinking speculation, but this seems a rather ridiculous way of "vicsim-hugging" here.
Top

So the "victims of 9/11" that likely didn't exist are being transfered to other disasters because 9/11 failed so miserably to convince?

Let's propose that the "victims of 9/11" were all sent on a rocket to the sun while we're at it.

This Flight 587 should be treated as a separate case from 9/11 and not get any attempts to tie it to 9/11 for no particular reason.

I value far-thinking speculation, but this seems a rather ridiculous way of "vicsim-hugging" here.

I ain't huggin nuttin, and don't understand the 'rocket' comment.

Links between the 2 cases aren't exhaustive, but include Big Media, New York, aviation disaster, documentaries taking the chance to pump out 9/11 imagery and affirmations, poor imagery flashed by as though it's not meant to be scrutinised, limited number of interviewees in documentary, The History Channel(!), early days conspiracy theories about what witnesses saw ocurring in the sky (but it was a plane, they tell you!), and more. Nothing super-convincing, but at this stage, I rule nothing out.

As Brianv previously found, no flight data exists for 587 out of JFK for the year 2001,


http://www.youtube.com/watch?v=AFmVUok05E4
At 7:53 Narrator intros footage from ‘amateur cameraman’ . Ensues poor quality, fast cutting clips from multiple positions.
8:05 colour balance change for oddly isolated fire.
8:15 man in cap becomes headless and opaque.
8:31 man at one with tree.
Are all these disjointed and fleeting scenes by the same cameraman? Why close ups of fire burning? “Why do they not show MORE footage of the real events on the ground”, and why not slow it down to give us a good view? Suspect, that’s what it is.

Also accept Brianv's observation of the unlikelihood of a third aviation disaster in NY in a month, and right after 9/11, but did I mention not ruling anything out?

Here's the Wiki shot of the zone, pic courtesy of National Oceanic and Atmospheric Admin.

The case was a sure disaster for modern photgraphy and data transfer. Queens is apparently much populated by services, firefighters and the like. Does this mean there's lots of government contract housing? Does this mean 'they' would have been able to torch an empty government complex?

Case open, or at least ajar, i say.
Top

At 6:10 we hear from Deputy Fire Chief Pete Hayden, instrumental in production of the 9/11 fictional narrative, working closely with Jo Pfeiffer. 12th Nov was veterans day, public holiday, and Hayden had just popped out to walk the dog: he hears the aircraft overhead making a ‘straining’ noise, and witnesses it break apart and crash. “There are bodies everywhere, all over the streets, in yards, some victims still strapped into the seats.”

It certainly is open, Idschmyd.

I've taken a brief, cursory look at this affair. These are just a few notes I am scribbling down here - not nurturing any particular theory at this time - no worries, folks! Anyhow, so far I have learned that:

This young fellow with the punky hairstyle is, practically, blamed for the 587 disaster:

(Neither of the two are listed in the SSDI: http://ssdi.rootsweb.ancestry.com/cgi-bin/ssdi.cgi (please double-check it for yourself)

As the story goes, Mr. Molin apparently yanked the Airbus commands too brusquely while trying to avoid the wake turbulence of a preceding Jumbo, thus causing the vertical stabilizer to neatly snap off from the fuselage. Here's the offending aircraft part fished up from the waters of Jamaica bay - about a mile from the crash site: I would ask any experts if such a breakage has ever occured in aviation history. Anyone?

A look at the passenger manifest reveals it was an almost exclusively hispanic lot of travellers. Of the 251 passengers, a mere 18 had non-latino/hispanic sounding names. Those 18 passengers are listed below:


I must say that the few, blurry available frames of "amateur video" of the event (at 7:53 in video pointed out by Idschmyd) are most reminiscent of the horrid Camera Planet animations of 9/11 - and that the eyewitness seen in this video at 8:35 is possibly more hilarious than all the 9/11 eyewitnesses put together! :lol: http://www.youtube.com/watch?v=AFmVUok05E4

That's all for now.
http://www.septemberclues.info
Top

Well, 9/11 hits hard in the Witness Hilarity dept, but that guy's a card! Very hard to see exactly what's going on around him, or to know who filmed it. Was it the amateur cameraman mentioned ealier - seems to be the same rubbishy camera.

Just about all pics in this story are familiar quality. 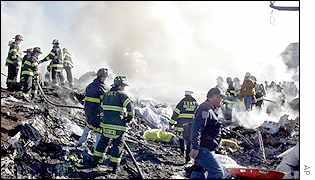 This from the BBC from AP.

Article titled 'US aircrash victims favoured', which should have made this one a bargain.

At 3:05 in this video, Giuliani states :
"As the governor said, there were 255 people and crew members that were listed on the manifest..."

The documentary unfolds in pure 9/11 propaganda style - mixing seemingly "real news reports" with seemingly "candid reconstructions" in a hypnotic manner which blurs any casual viewer's distinction between fact and fiction. But let's leave aside those aspects for now and just point out the following fact:

The Flight587 disaster allegedly claimed 265 fatalities: 251 people + 9 crew members + 5 fatalities on the ground. Giuliani reported in his press conference a flight manifest figure of "255" instead of 260. This little 'mistake' is not as little and innocuous as it may sound: In the months following 9/11, it would seem wildly improbable that American Airlines didn't keep infallible records of the passengers boarding their flights. Not? <_<
http://www.septemberclues.info
Top

Were the real ones killed in this accident that perhaps also included fake names?