The Teddy Bear as Symbol of Islam

I expect everyone here was wise to the dubiousness of the Mohammed the Teddy bear story back in November 2007.

I wasn't. I thought it was real.
There was an atmosphere of fear about criticising muslims at the time. And I was thrilled when Ian Hislop and Paul Merton broke the tension on TV show "Have I got News for For You", by saying:


"We've got to make sure we're very careful about what we say... about those DERANGED LUNATICS!"

The story established (or re-enforced) the Teddy Bear as a symbol is Islam.

One of many Islam Bears on peoples' blogs Here is the woman accused of naming a bear "Mohammed":
Gillian Gibbons
Mrs 7/7 ?
(G is 7th letter)
Sure, the woman's initials don't prove anything but they don't inspire confidence in the story either... Other Islam Teddy Bears include the BBC's Pudsey Bear who has a Mujahadeen look about him with the scarf and the bomb-shaped buttons: The symbol is seeded throughout our culture, potentially as a scapegoat symbol of Islam...


The reason I raise the teddy bear symbol is because I was making a video about Fearmongering today.
I used the Lilly Allen song "The Fear" as the soundtrack and discovered anti-Islam subliminal messages, by chance.

This led me to decode the symbolism of the video in the light on those subliminals - Including the bizarre, teddy hanging on the washing line in the opening shots...

While making the video i wasn't thinking about the song - then suddenly a line leapt out at me:

"Islam my fault, it's how i'm programmed to function"

Of course I thought it could be a mishearing.
But the previous line is:
"I am a weapon of massive consumption" - which is less subtle in its associations.


So I went back to the beginning of the song to decode the lyrics.

We are supposed to think the song is a critique of materialism and celebrity culture - but it is shot-though with a subtext about Islamic Suicide-Bombing!


"I want loads of Clothes and fu(kloads of diamonds"

(there is Koran reference about suicide bombers receiving virgins with "complexsions like pearl and diamond".)

"I heard people die when they're trying to find them"

Not miners dying in diamond mines, but suicide bombers dying to obtain virgins.!


Then at the end of the song, she says:

LILY ALLEN IS SPEAKING THE WORDS OF A SUICIDE BOMBER!!!

The video to the song is full of Crusades imagery:

At the moment she says Islam, you see what looks like a Knights Helmet.

The moment when she says "Islam" - A Knight's Helment.

And where the teddy bear comes in, is right at the beginning of the song:
- hanging from the washing line - lynched?

The video for this song is filmed at Wrest Park, near Luton - a town that received much of the 7/7 limelight)

I stumbled across the Islam-related subtext in this song, and believe it is part of the same social-engineering project that the fake terror attacks are working on.

Iif anyone else wants to check out the lily allen song... see what you think.
http://www.youtube.com/watch?v=q-wGMlSuX_c

or my video too :)
http://www.youtube.com/watch?v=9evLwN5U7xo
Top

Have a right good butchers at this Timothy!

I'm sure the master of symbolism - the Great Oswaldo, will be along shortly to give us the complete run-down!

that's quite the cocktail of imagery, brian.

the lightening bolt is pretty popular these days isn't it.
Top

I'm sure the master of symbolism - the Great Oswaldo, will be along shortly to give us the complete run-down!

I'm not touching this one.

Strangely, both their names have divine / holy connotations.

Since they both have strong connections to Channel 4 this could help build a smoking-gun case against Channel 4.

(The Benedetta Ciaccia Memorial film has only been shown on Italian TV and at the Channel 4 cinema).

The trend we see of people deliberately made to look like other people seems designed to create confusion and befuddle the senses. - like a smokescreen.

Sally Phillips - suspected as an actress in the fake 7/7 footage - seems particularly keen to confuse in her public appearances:
She ressembles other actresses:

I could go on - sure, Phillips does comedy and impersonations, but i don't think any of these are in those contexts.

Grids of Terror Vicsims and Grids of Celebrities / Models

I have noticed a strange similarity between the way "victims of terror" and other groups are presented.

Here are the contestants of one of the Big Brother houses:

Are "they" conditioning everyone's minds with images like these?
Top

Lilly Allen sings The Fear - a song about being a suicide bomber:

We see that Natasha Khan (Bat for Lashes), looks exactly like her and is muslim:

Bat for Lashes has connotations of being a black scapegoat.
Lily Allen is lily white.

Khan is cast as a kind of "evil twin" who absorbs any negativity and blame that Allen generates in her music / public persona.
(more on this later)


(Both Allen and Khan are on on Parlophone records, which would aid any co-ordination of their careers.)
Top

Lily Allen, and Bat for Lashes, twin pop stars on Parlophone, who ressemble each other, release twin albums:

Natasha Khan's Two Suns on 6 March 2009
- an album cover on which she appears to be holding two bombs: 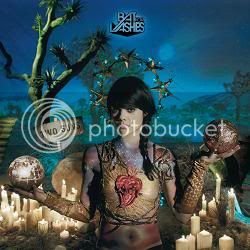 Bear in mind the Koran quote:

They also are promised something more risqu?: unlimited sex with 72 virgins in heaven. The Koran, the sacred book of Islam, describes the women as "beautiful like rubies, with complexions like diamonds and pearls." In one of the passages of the Koran, it is said the martyrs and virgins shall "delight themselves, lying on green cushions and beautiful carpets." Since the time of Mohammed, martyrs have always been considered those willing to die defending Islam.


Lily Allen's song "The Fear" is about being a suicide bomber...


i want loads of clothes and f#ck loads of diamonds, i heard people die when they're trying to find them...

Her song "Daniel"
is connected to Allen's "The Fear"


The "Daniel" video is very dark, full of blackness and fear, all attaching itself to Khan.

(btw. Daniel, the Hebrew Prophet was forced to go to babylon with 3 other youths - a group of 4 young men -, for training and missions - like the youths in the 7/7 Ripple Effect story - Daniel was praised for his strict observance of religious law etc. )


Presumably, Natasha Khan's alter ego Pearl, is meant to be one of the 72 virgins.

=hoi.polloi,Feb 14 2010, 08:35 AM] However, is there also some core language that only the self-proclaimed elite are meant to understand and promote between themselves through such publications and such dates being the moments of their most aggressive military campaigns and/or psy-ops?

talking of core language that is hidden from us etc.

Lily Allen and Natasha Khan have an eleven theme. (K is 11th letter).

They have a kind of Twinning / mirroring theme in many of their songs - they are kind of twinned, like the "1"s in 11:

Khan and Allen are the Two Suns.

Bat for lashes represents a dark-skinned scapegoat.
A Bat for receiving punishment. - I know it's sick.

hidden language, Bat for Lashes and 7/7

Lily Allen from The Fear:
"And i’ll take my clothes off and it will be shameless
Cause everyone knows that’s how you get famous"

- Here - in the twin record - Daniel, Bat for Lashes has taken off her clothes...

- Lily Allen sings about evil, crass behaviour, then Khan mirrors her by releasing records slightly after her, and taking the blame...

-Also note Bat for Lashes has Karate Kid tatooed on her back .
KK.

Although I'm not an expert of the occult, I assciate KK with 7/7, at least from this Press Association picture from the opening of the 7/7 memorial (see below).


talking of mixing up celebrities to kind of confuse us, this banner just appeared at the top of this page:

talking of mixing up celebrities to kind of confuse us, this banner just appeared at the top of this page:

I'm glad I have AdBlockPlus installed in my browser and dont have to look at shite like that on a daily basis.
Top

good call on the Lily Allen stuff. Her music contains lyrics like "before september 11, before hijacked planes ..." and a pervasively aggressive non-social attitude. Coupled with her "evil twin" it looks like a record company collaboration to maximize profits from consumers of anti-humanism and the victimhood complex. Which, of course, would be their excuse should they ever be discovered for the illegal subliminal messengers they are. (Yes, in the U.S., subliminal ads are indeed illegal. Yet the laws surrounding it are not apparently very public. Also for UK and Australia, there are significant bans on the use of subliminal marketing.)

Has the "culture war" against humanism gotten so twisted that children must be trained to be sociopaths by those wealthy string-pullers who believe we are inherently as anti-social as they?
Top


Goddess imagery in 7/7 has been looked at on the occult lingo thread.
Mary Magdelene, Virgin Mary, Queen of Sheba, Isis etc.

What I didn't pick up on about the Queen of Sheba (or Saba in arabic) is that her name means SEVEN, in the semitic languages! ("Sheba" is Hebrew).


In the occult, Queen of Sheba - Queen of Seven - is considered to be the same entity as Mary Magdelene.

The Queen of Sheba's name was Makeda, or Magda: http://www.bethel.edu/~letnie/AfricanCh ... akeda.html

(Magda - as in both Magdelene and Sheba - means Tower.)


Sheba means seven or Shabbatt - The Sabbath, or Saturday.This helps explain why Ian McEwan, the 7/7 scriptwriter choose to set his 2005 novel all on one Saturday, and to call it Saturday...(Seven-day)

Incidentally, his very successful 1987 novel about a child going missing - THe CHild in TIme, was also pivoted on a Saturday - the day when the narrator loses his daughter.

So does On Chesil Beach, his 2007 novel about a couple who do not consummate their marriage... -

On Chesil Beach is an extraordinary novel that brilliantly, movingly shows us how the entire course of a life can be changed ? by a gesture not made or a word not spoken

Ian McEwan and Raj Babra - the importance of one moment in time
I am reminded of Raj Babbra's film, "Life without Bennedetta",

All McEwan's novels seem to be about some pivotal moment that changed everything (on a saturday - or a seven-day), and about the nature of time changing...

That also seems to be a major theme of all terror and terror propaganda
" The day the world changed" etc.

Here is a Time-related quote from Raj Babbra's phony 7/7 film "Life without Benedetta":

"The Meaning of time changes - An hour is measured by what happened before that moment and what happened after that moment. Left in the torment of not knowing, if just one thing was different, just one decsision was changed, it could have all been prevented."

timothymurphy @ Feb 13 2010, 10:23 AM wrote:
I really don't think alot of this stuff is about getting away with the terror hoaxes, it's about making us lose our bearings...

Our bearings are ok, thank you very much <_<

If I were in a bad mood I'd say that you're pushing the notion that :

2. Sally Phillips and a host of other celebs look the same

3. The Big Brother contestants and the 7/7 victims and the Hairstyle models look the same.


Please let me know if it's just my bad mood pulling jokes on me. Thanks.
http://www.septemberclues.info
Top
Post Reply
71 posts