The Banks' War Against Us

Historical insights & thoughts about the world we live in - and the social conditioning exerted upon us by past and current propaganda.
Post Reply
First unread post • 76 posts

Re: The Banks' War Against Us

The Masonic G with the double stroke in the image here brings up the old conundrum: where does the dollar sign come from?

The Wicked offers a couple of possible explanations, but they seem much too trivial for something so sacred to the ritual-loving Masons. If the one-dollar bill is heavily weighted with hermetic symbols, why would the dollar sign itself have been left to the blind forces of history?


There are several hypotheses about the origin of the dollar sign. It is first attested in American, Canadian, Mexican, Spanish American, and other British business correspondence in the 1770s referring to the Spanish American peso, also known as "Spanish dollar" or "piece of eight" in America, which provided the model for the currency that the United States adopted in 1792 and the larger coins of the new Spanish American republics, such as the Mexican peso, Peruvian real, and Bolivian sol coins. This explanation holds that the sign grew out of the Spanish and Spanish American scribal abbreviation "pˢ" for pesos. A study of late eighteenth- and early nineteenth-century manuscripts shows that the s gradually came to be written over the p, developing into a close equivalent to the "$" mark. A variation of this hypothesis derives the sign from a combination of the Greek character "psi" (ψ) and "S".
[...]
A dollar sign with two vertical lines could have started off as a monogram of "USA" used on money bags issued by the United States Mint. The letters U and S superimposed resemble the historical double-stroke dollar sign. The bottom of the U disappears into the bottom curve of the S, leaving two vertical lines. Dr. James Alton James was a professor of history at Northwestern University from 1897 to 1935, and he postulated that the symbol with two strokes was an adapted design of patriot Robert Morris in 1778.
https://en.wikipedia.org/wiki/Dollar_sign

The explanation for the invention of the dollar sign given by René Guénon in his essay "Concerning the Two Saint Johns" (first published in Études Traditionnelles in 1949) goes back further in time and is much closer to the Masonic spirit. According to this view, the original design from which the dollar sign evolved is the solstitial symbol below: 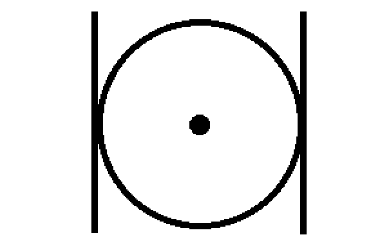 The circle represents the annual cycle, and its solar significance is made more evident by the presence of the central point, for this same figure is also the astrological sign of the sun. The two parallel lines are tangents of the circle at the solstitial points, which they thus define as ‘limit points’, these points being in fact bounds beyond which the sun can never pass in the course of its journey.

These two tangents are often referred to as the “Pillars of Hercules”, a solar hero. According to Greek mythology adopted by the Etruscans and Romans, Hercules would have placed two pillars in the Strait of Gibraltar, marking the limit of how far the Mediterranean navigators could go. In other words, the Strait indicated the end of the world that could safely be explored, the Finisterra or Non Terrae Plus Ultra. This was illustrated on ancient Spanish coins by two hefty pillars joined by a kind of streamer on which “ne plus ultra” was inscribed, meaning “no travel beyond this point”.

At the time of Columbus, this rule was flouted, leading to the invasion, plunder and colonization of the lands to the West. The inscription on the streamer was soon changed to “Plus Ultra” (something like “Yes, we can”), as seen in this ornament from the city hall of Seville: 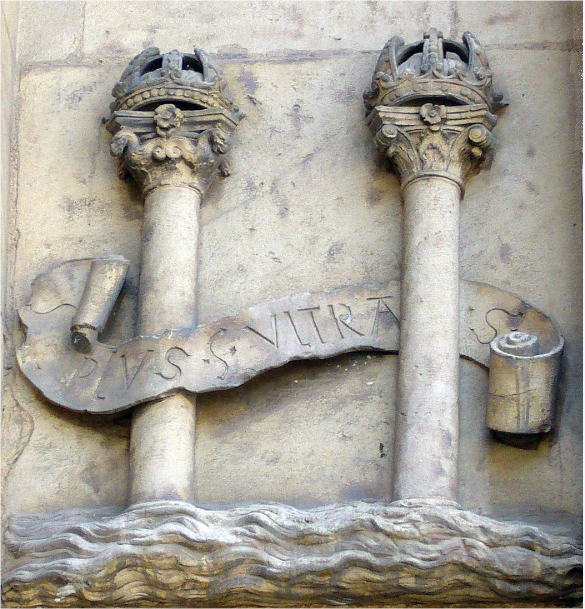 Eventually, all the importance was given to the streamer, which originally was only an accessory but now became a hefty “S”, while the two columns which constituted the essential element were reduced to two parallel strokes, vertical like the two tangents to the circle in Masonic symbolism. One could say the dollar sign is a sort of inside joke, a way of giving the finger to the medieval European world view.

(I know it’s childish, but it only happens once every ten years)
Top
Post Reply
76 posts