Historical insights & thoughts about the world we live in - and the social conditioning exerted upon us by past and current propaganda.
Post Reply
First unread post • 97 posts 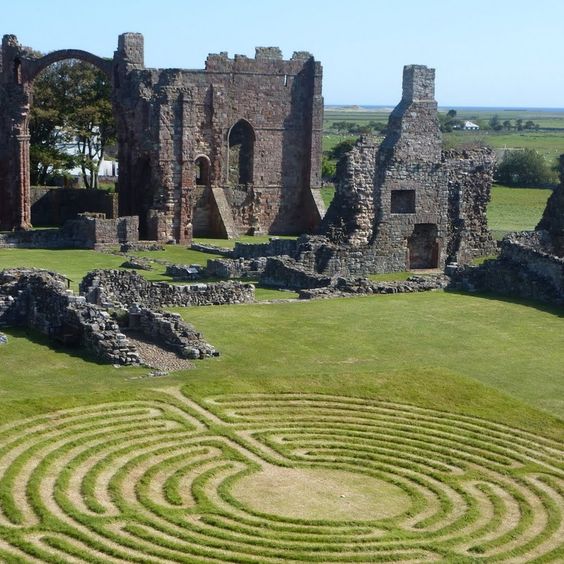 That looks like the ruins of Lindisfarne Priory, Northumberland, England. Ruins supposedly date to the 12th century.

The overall structure, and that column, look Norman to me, not Roman.
Top

That looks like the ruins of Lindisfarne Priory, Northumberland, England. Ruins supposedly date to the 12th century.

The overall structure, and that column, look Norman to me, not Roman.

glg wrote: ↑
Mon Jul 19, 2021 10:06 pm
Isn't the question first, what these blocks of stone - unremarkable in comparison to a mind boggling array of mega structures outside the european sphere of ancient buiding tech. - even make it worthy of considering? [...] everyone thought of it as a ¨Pile of Stones¨.

What makes Stonehenge something other than a mere pile of stones is the origin and handling of the building material and the use of tenon joints, and, some would argue, the configuration and orientation of its components. The question of orientation is tricky and easily subject to fantasy and 'tweaking of facts' so I will leave that for some other time. The quarrying of the stone in locations far from the building site is an indication of organized and purposeful construction. I will try to find some time to post a summary of the topic. 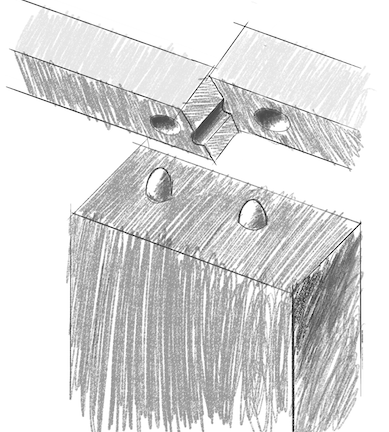 Now, the reason Stonehenge looks like little else than a pile of stones is not just the deteriorated state it has been in since it was painted in the 18th century, but the fact that only brute stones were used. In fact, nearly all prehistoric sites in Northwestern Europe were built with unhewn stones. It is tempting to conclude that the builders didn't have the technology to shape and dress the stone, but their use of effective tenon joints suggests otherwise.

Perhaps brute stone was what they wanted. Brute stone would have acoustic, magnetic and reflective properties different from those of blocks with flat and polished surfaces at right angles. And what may be equally important: the two types of building material imply a different spiritual perspective. Brute stone represents undifferentiated 'prime matter' and is opposed to hewn stone in the same manner as virgin nature is opposed to a garden. Before we classify this as romantic vagaries of the imagination, let us not forget there are examples in other parts of the world of the coexistence of altars of brute stone with buildings of hewn stone. For example, altars among the ancient Hebrews had to be made exclusively of unhewn stones.
Top

glg wrote: ↑
Mon Jul 19, 2021 10:06 pm
Isn't the question first, what these blocks of stone - unremarkable in comparison to a mind boggling array of mega structures outside the european sphere of ancient buiding tech. - even make it worthy of considering? [...] everyone thought of it as a ¨Pile of Stones¨.

What makes Stonehenge something other than a mere pile of stones is the origin and handling of the building material and the use of tenon joints, and, some would argue, the configuration and orientation of its components. (...)

I agree Flabbergasted and the rest of your comment is very interesting indeed. But alluding to it merely to a ¨pile of stones¨ which apparently Inigo Jones' contemporaries thought of it as, despite the structure asfaik already being termed a Stone-Heng (Hanging Rock?), may tell us more about the structures original design and in turn of its age.
The following is much conjecture on my part and based perhaps on to little data, but if indeed there was a time when that site was referred to as a ¨pile of stones¨ then perhaps there is another reason for this then mere simple-mindedness. Maybe IT WAS once a ¨pile of stones¨?!
There's such a clue in Inigo Jones' book ¨The most notable antiquity of Great Britain¨:

Thirdly, in regard of the Form of Stoneheng, which is circular. This figure was proper to the Temples of Coelus and Tellus, whom the Ancients called Vesta as Valerianus in his ¨Hieroglyphics¨confirms. And to this purpose also, Leon 'Baptista Albertus useth these words:
"Unto Vesta whom they reputed to be the Earth they built Temples of a round form globelike.

Now obviously there's nothing particularly ¨globelike¨ about Stonehenge and Inigo Jones himself just used this reference to further his contention that the structure was probably remains of roman origin and more specifically a temple structure in the tuscan architectural tradition devoted to Coelus.
Philander whom is also cited by Jones:

Although(saith he) the Ancients made some Temples square,some six sided others of
many angles they were especially delighted "with making of them
round, as representing thereby the Form or Figure of Coelum, Heaven.

Keeping this in mind, at the time of Inigo Jones one particular site which I want to point here, has only been found and excavated centuries after.
The tumulus of Gavrinis: 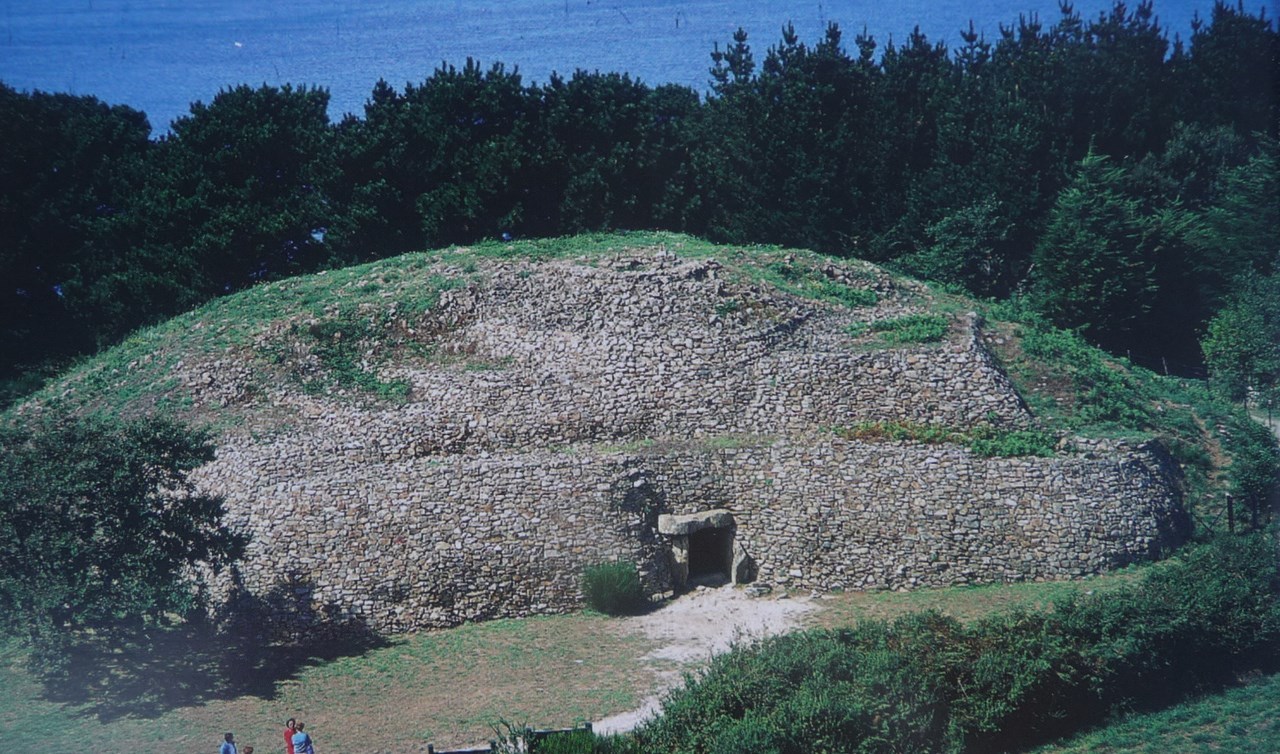 Talk about a ¨globe or dome like structure¨!
Notice of course the heavy stones used as a skeleton similar to the naked Stonehenge.
But if there's a relation between Gavrinis and Stonehenge, then what happened to the covering at Stonehege? Well, perhaps those smaller stones were carried off?! Just like a ¨pile of stones¨ ready for reuse by later inhabitants of the region who later referred to the site as just a pile of stones.

Now Idk if anyone ever thought of that, or if it can be readily debunked, neither does my hypothesis shed light on how these stones were laid, but I thought I would throw it in here and see before perhaps I have more to say on this issue.

Edit: a link to Inigo Jones' ¨The most notable antiquity of Great Britain¨ https://ia802805.us.archive.org/19/item ... 00jone.pdf
Just for reference

Edit II: I must also remark - having just chanced upon this in said book - that Inigo Jones made sure: (...) for Stoneheng was never covered, but built without a roof. Which Decorum the romans ever observed, both in the Situation and aspect of the Temples dedicated to this their God (Coelum)(...)
Now might not just this peculiar certainty have stuck in many minds concerned with the structure?
Top

Gavrinis is an impressive site. I have seen a few burial mounds, but none with this level of walling. As you can see from the small Scandinavian mound pictured below which I stumbled upon a few years back, resting peacefully on a piece of farm land, the chamber inside is similar in design to that of Gavrinis (despite the absence of ornaments). It´s funny how European building techniques and architecture could have been so 'standardized' 5-6000 years ago. 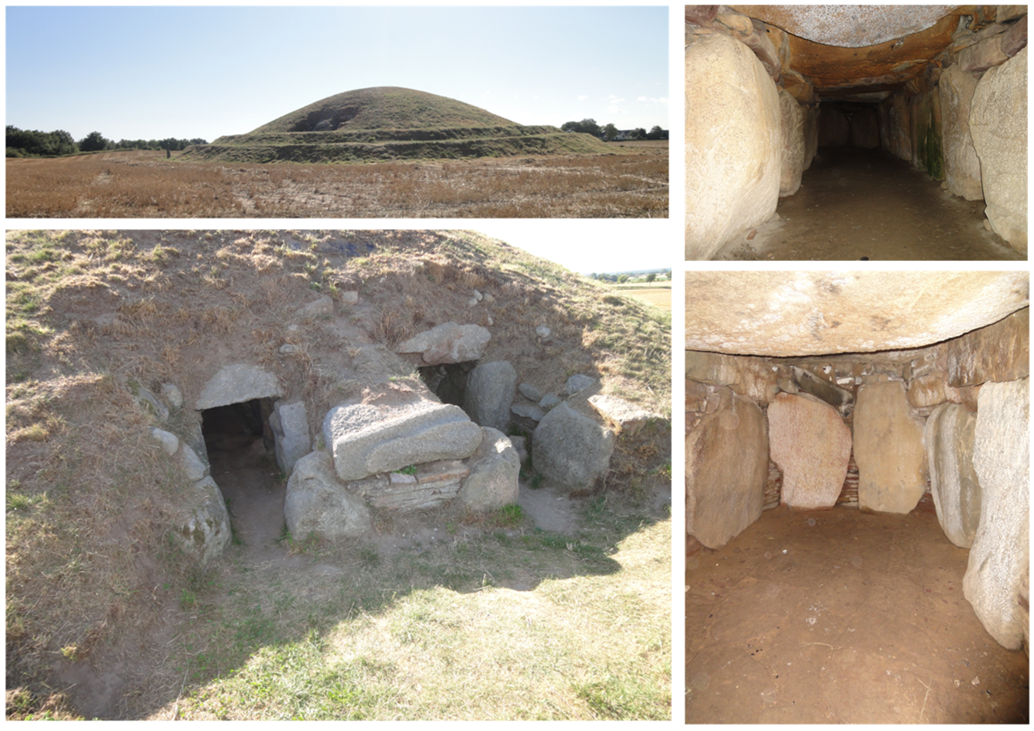 I am calling it a burial mound out of habit. Human remains have indeed been found in some mounds (the Wicked mentions a site with evidence of around a hundred burials), but it is important to keep in mind the symbolism of the cave as a place of initiation through 'death' and 'rebirth'. Actual funeral rites are inspired by this initiatic symbolism, although anthropologists have it the other way around. In short, these mounds could have been graves from the outset, or they could have become graves at a later stage. It´s hard to say for sure.

The notion of the mounds as 'wombs of alchemical transformation' rather than graves is supported by the ease of access to the chambers (see the picture above) and possibly by the orientation of the entrance. I haven´t looked into this latter aspect, but archeologists have decribed what they claim is the alignment of mound entrances to the position of the sun or the moon, as the case may be. This would not be surprising, regardless of the use of the mound.

That´s a cool book. I am looking forward to exploring it.


glg wrote: ↑
Wed Jul 21, 2021 5:05 pm
Inigo Jones himself just used this reference to further his contention that the structure was probably remains of roman origin and more specifically a temple structure in the tuscan architectural tradition devoted to Coelus

The similarity between temples in Northern India, Persia, Rome and Ireland is not difficult to explain. The ethno-cultural-geographical belt stretching from Kashmir to the Shetlands was for millenia dominated by the so-called 'Aryan mythologies' (Hinduism, Zoroastrianism, Druidism, Norse paganism, classical Roman and Greek religion, etc.). Their pantheons, temples, languages and 'spiritual economy' display a strong affinity.

On the other hand, Fractal: not all round things are the same

I found this cutaway drawing of the internal chamber of a mound named Rævehøj. There is more know-how to it than meets the eye at first. In this case, birch bark was used to impermeabilize the chamber. It has kept it dry for over 5,000 years. Not bad. 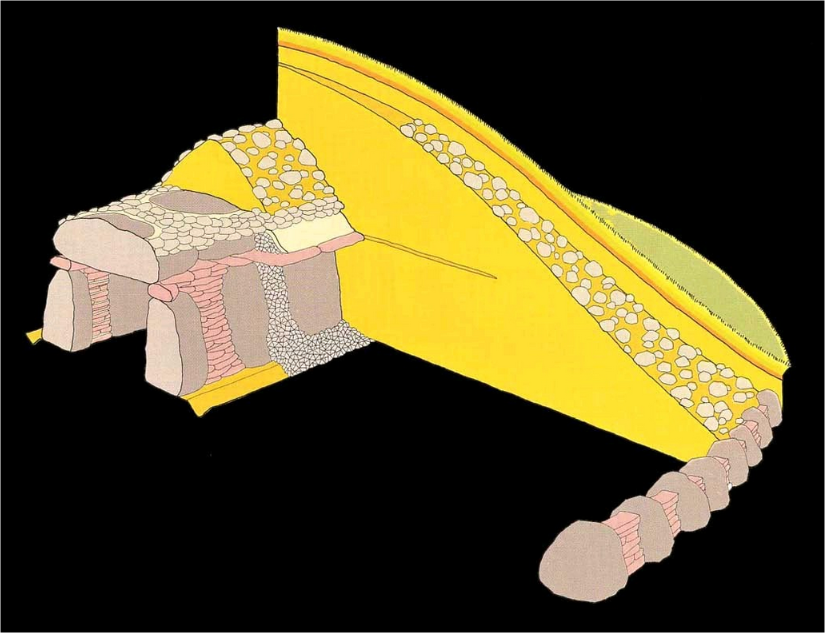 The next one seems more like a proposal than proven fact. But a mound is not a pyramid, so it´s probably not far from the truth. 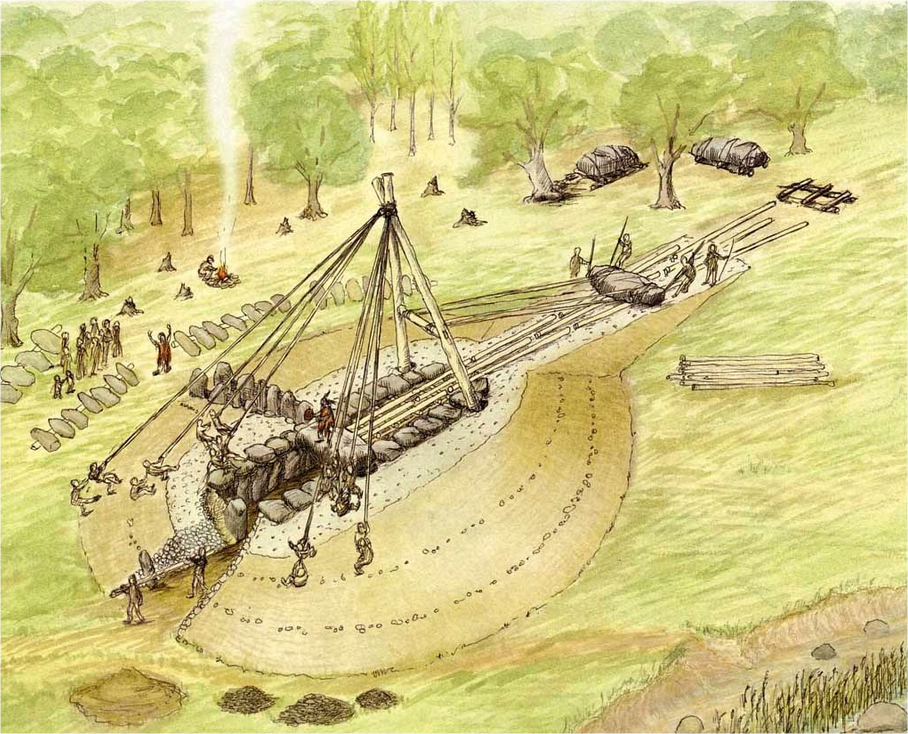 Art historian Vilhelm Wanscher (1875-1961) wrote mostly about classical art, esthetics and architecture, but he made an exception in 1935 when he published a surprising interpretation of the petroglyphs found in a royal tomb in Kivik, a small town on the east coast of Scania (Southern Sweden). The tomb, which differs from most European burials from the so-called Bronze Age (c. 1500 BC), contains at least eight standing slabs depicting what most people identify as “people, animals, ships, lurs, symbols and a chariot with four-spoked wheels”. Professional excavations started in 1931 so Wanscher was not a latecomer to the information.

Wanscher’s knowledge of classical antiquity and egyptology made him see numerous correspondences between Egyptian religion and hieroglyphs, on one side, and Scandinavian cults, place names and the petroglyphs in Kivik, on the other. This may sound a bit crazy, and I am not qualified to judge the merit of his claims, but it is curious how pronouncing certain Scandianavian toponyms in Egyptian makes a lot of sense, perhaps more than their modern-day etymology.


Should someone object to the theory of our ancestors’ close spiritual connection with Egypt since the stone age, saying it is a delusion because Egypt is too far away, my answer is that in many important cases the Egyptian etymology provides the correct form and meaning of the words.
Wanscher: “Kivik Guldhorn og Edda”, p.42.

According to Wanscher, in the so-called Bronze Age, Egyptian tradespeople assigned religious names to many coastal landmarks on their way to the Baltic, dedicating them to the sungod Ra. Some examples (including four cultural terms) :

Modern etymologists will have nothing of that, obviously. For them, the sea that bathes the western shores of Sweden is named ‘Kattegat’ because it’s “a narrow passage even a cat would find it hard to get through” (except it’s not). The name of the strait that connects Kattegat to the Baltic Sea, ‘Øresund’, is said to mean “the narrow waters of the gravelly shoreline.” And so forth.

As for the petroglyphs/hieroglyphs in the grave, Wanscher’s analysis is very condensed and difficult to digest, so I will show just one example:

Right: Despite his numerous honours, awards and accomplishments, Wanscher was ‘cancelled’ after World War II for taking too much interest in contemporary German and Italian culture and not being sufficiently inimical to the German occupation. Nothing to do with the topic. Just gossip.
Top
Post Reply
97 posts