Historical insights & thoughts about the world we live in - and the social conditioning exerted upon us by past and current propaganda.
Post Reply
First unread post • 37 posts

@reel.deal thanks for the links to Anthony C. Sutton.

This could/should/may warrant a separate topic because it [ACS's assertions] brings into play another often overlooked item with regard to the USSR and the West/Allies.

Going back to WWII, not many people realise that Russia and Japan never declared war on each other though they were near 'neighbours'.

The significance of this is that Russia diverted battalions from its 'Eastern' front [Vladivostok] over to its 'Western' front, Stalingrad, and effectively dealt the penultimate 'death blow' to Nazi supremacy.

Though this put Russia 'through the mill', it was a better result that having it fight two allied enemies on opposing fronts, something they probably would not have succeeded in defending themselves against.

Following on from WWII, we enter the Korean War and though USSR vetoed the action against Communist Korea, as it was on the UN Security
Council, you had a strange situation wherein the USSR was 'privvy' to information regarding UN/US troop movement and action, which they then passed on to either the North Koreans directly or via China [if they were still on 'speaking' terms].

Either way, they were providing armaments [and even Pilots] to the North Koreans and we all know who benefits from the supply of arms on any side!

Similar thing with the Vietnam War in which the USA openly 'broadcast' that it would not attack the Ho Chi Minh trail within so many hundred metres and outside of Vietnam territory [irrespective of the fact that countries and other areas were bombed outside of the confines of Vietnam during the same period].

As I used to 'bang the drum' about what would Pepsi do against Coca Cola in order to gain supremacy of sales in any given environment/territory [ie possibly/probably anything from misdemeanours to murder], someone once pulled me to one side and said 'How do you not know that they may be owned by the same person?' which stopped me in my tracks and was never something i had contemplated.

I am pretty sure that I am not alone in now thinking that this [in essence] is how it has always been.

Anyway, sorry for going off topic but thanks again to you for the link to ACS and all the other contributors who make this forum my first port of call when i switch on the computer every day!
Top

Whatever... from the arrogance of science and the arrogance of handed-down culture and religion, we are bouncing back to freewheeling unthinking superstition... is this because humans are doomed to never find balance? We could at least try... Sorry but I am awfully glad you're not sticking around with this stuff, Nico. For the little I can understand anyway of your "artistic" endeavors.

If the world is 362 years old, it means there have been roughly 15 generations between us and the beginning of the time (362/25 = 14.48). This imagining that the world began with full-fledged humans from day 5th or something.

Now those generations normally overlap each others in threes, in the form of children-fathers and grandfathers (when not in fours). Which means that gaps of knowledge for 15 generations might have accumulated merely 5 times. 15/3 = 5. Naturally such gaps are very rare when people cluster in societies, have developed a spoken language and oral tradition, and ever more rare when writing is involved.

In fact, most gaps in history are not attributed to "Time", but to wars, famine, forced migration, conquest: especially when such things come in times when writing history or science down isn't easy nor common. Then gaps can be significant. But in 362 years there isn't even enough time to impoverish soil, let alone invent from scratch weapons capable to destroy entire peoples.

Yet somehow with these mere 5, unlikely, potential gaps in knowledge we managed to: forget everything about the age of the world, and completely rewrite its history; change style, culture, architecture, philosophy, religion, ideas, names, languages, boundaries, food and reinvent ourselves thousands of times.

I am afraid this way of thinking is destined to crash on itself even with numbers ten times higher. Unless we want to assume that Xenu gave us all the knowledge in advance, even if the world were 5,000 or 10,000 years old I am afraid there still wouldn't be enough time to account for the discovery of rotating agriculture, aqueducts, fresco paintings, automobiles, ricotta, pyramids, scuba diving and multi-identity trolling.
Top

full link: http://www.youtube.com/watch?v=umyhZu6gXmQ
on archaeology, right up to todays matrix code binary,
was "0" (zero) invented by a 15 yr old kid in India ?
what is the true date/origin of "1" ?

I too found the star correlation theories of Hancock and Bauval fascinating, however recent investigations of Giza correlation with 'sacred geometry' makes me wonder what the real deal is:

Not only showing a ‘fibonacci’ relationship between all three, but the blue diagonal intersects the apex of the central pyramid & the smallest pyramid clips the arc [in red] at a perfect tangent.

Which led me to look further and -especially- in the works of Da Vinci:

The centerline of the head bisects the heart, touched by a finger as if Leonardo is offering us a clue.
Top

Well apparently the principle of the golden ratio goes way back, certainly to the greeks, who probably or possibly borrowed it from the Egyptians along with a number of other discoveries. From the greeks it is supposed to have passed through the romans to the renaissance. The reign of the pharaohs has apparently or allegedly been one of the longest and more stable of antiquity, it is no surprise if it exported a lot of its knowledge and beliefs all over the Mediterranean. It is also not surprising that the site of Giza should respond to mathematical and symbolic principles. I would be surprised if it didn't.

(Please note how I use dubitative sentences, in order not to appear as a staunch uncritical supporter of official history, which I am not. Rather than turn these doubts against me, it would be desirable if we all applied similar caution in supporting any version of "history").

p.s. we are still missing an introductory post from you, orkneylad... you can do so here.
Top

nonhocapito - Many thanks for your thoughts, much appreciated.

Indeed, very rude of me. I shall introduce myself properly where directed.
Top

Now this downright pisses me off.

Stonehenge was moved by glaciers - not our prehistoric ancestors


The famous rocks of Stonehenge were not dragged by pagans but moved by glaciers, according to a team of Welsh academics.
Previously, a team of experts from University College London (UCL) claimed to have resolved the archaeological enigma, confirming that the stones were excavated and transported from two sites in Pembrokeshire by our prehistoric ancestors.
The team of archaeologists and geologists said Carn Goedog and Craig Rhos-y-felin, both in the Preseli Hills, had definitely been quarried for the mysterious stones.

They believe that between 4,000 and 5,000 years ago, rocks were taken from the Welsh mountain range by people and dragged away to where they currently stand, in Wiltshire.

But in a recent conflicting report, scientists have refuted UCL’s findings.
Dr Brian John, Dr Dyfed Elis-Gruffydd and John Downes have published their own research in the Archaeology in Wales journal, claiming there are “no traces of human intervention in any of the features that have made the archaeologists so excited”.

Well there you have it folks. Any "incovenience" getting in the way of the theory of evolution and all those ancient civilizations that did things we still don't understand, is now just going to be blamed on "natural" occurrences. How convenient.

It turns out the glaciers moved these gigantic stones in a circular formation facing the direction of the equinoxes, not humans. My goodness.

I just hope to god my children and grandchildren will live to see the day where the truth comes out.
Top

I don´t think the archeologists are claiming the glaciers fashioned and placed the boulders in their present configuration, but their glacial transport hypothesis is preposterous nonetheless. And to claim that there is "zero evidence in support of the human transport theory" commits the fallacy of assuming we know by what means our ancestors would have moved and raised the boulders.

I wonder to what natural forces Elis-Gruffydd et al. attribute the quarrying and transportation of the perfect 1,200-ton stone blocks in Baalbek.
Top


Theories of construction are many and continue to be invented. All are based on carving and hoisting natural stone, and none solves the irreconcilable problems. The casting and packing agglomerated stone theory instantly dissolves the majority of the logistical and other problems. 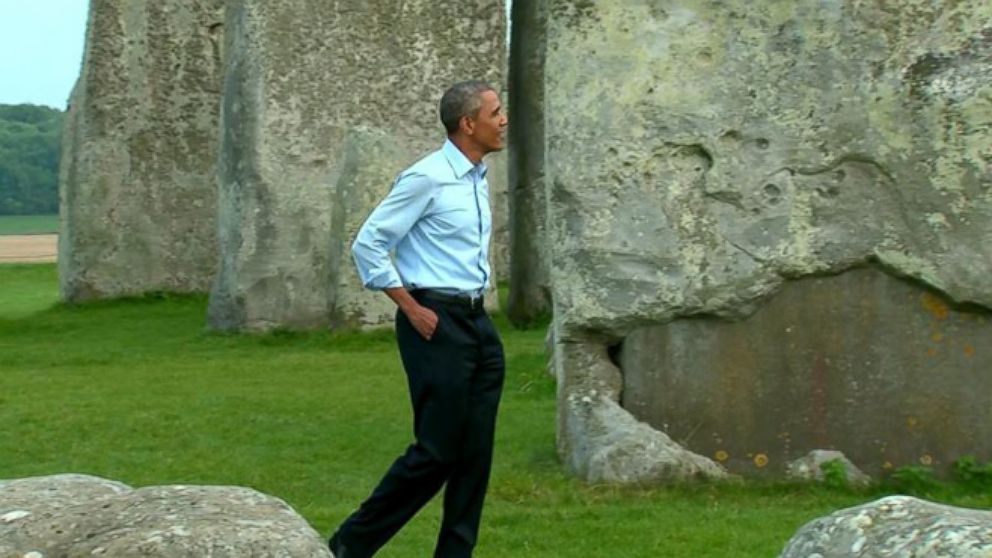 The above piece is from 2005 about how Stonehenge has been rebuilt over the years.

The guide book 'Stonehenge and Neighbouring Monuments' , and the audio tour of the Henge omit any comprehensive mention of the rebuilding in the 20th Century. Only on page 18 is there a slight reference...'A number of the leaning and fallen stones have been straightened and re-erected.' But even that official guide book does contain clues to the large scale restoration, which was not deemed worth a full entry.

I found this version. Are those really chamfered edges? This can't be real, surely it would have been spotted!

edit: Maybe we're being asked to look at the wrong fake object!

Has anybody here actually seen this alleged personage? My jury is still out.
Top

First there was this 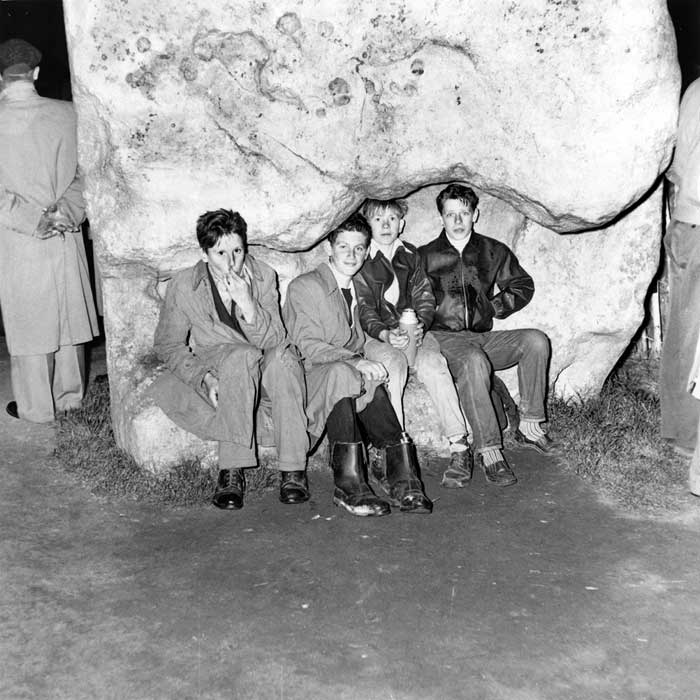 This guy has a solution 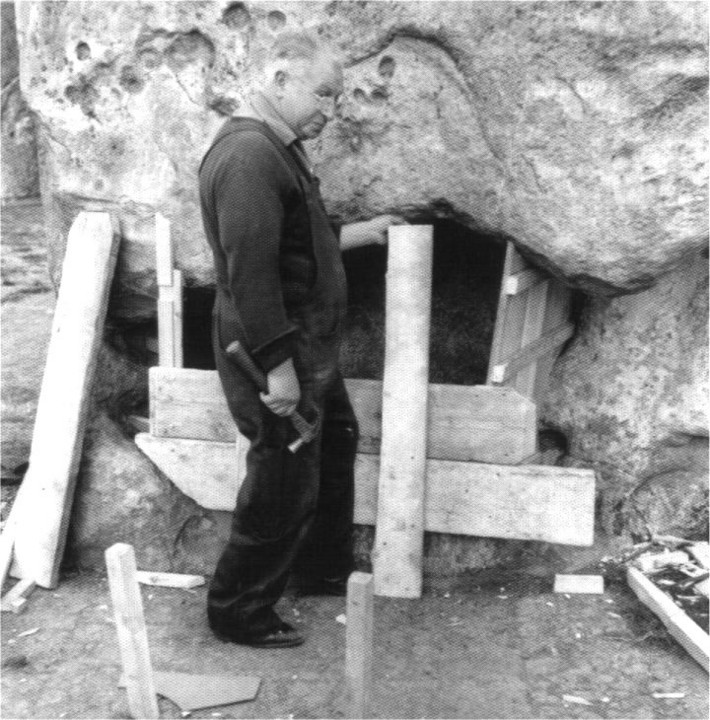 Now there is this 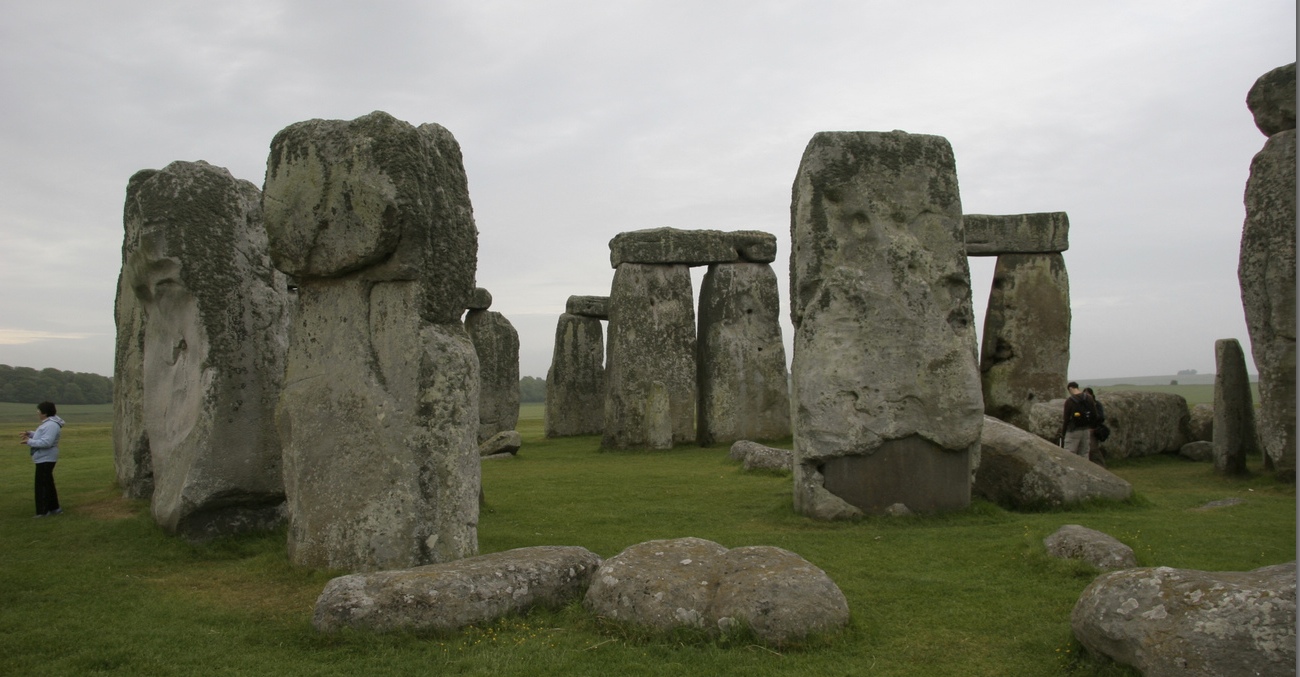 Inasmuch as I have taken a great interest in the ancient near east, it was of interest to me when this article came across a news feed today, particularly, for the mention of Ramses II (who is a noteworthy character for many reasons with which I will not exhaust you).

So, that doesn't read too bad. Of course, my gut instinct is not to believe it; so, I offer this for the scrutinizing eyes of the forum, as I see, at least, a missing leg...