Historical insights & thoughts about the world we live in - and the social conditioning exerted upon us by past and current propaganda.
Post Reply
First unread post • 23 posts

The amazing and action-packed life of Mark Lane:

"Lane was present in Jonestown during the events of November 18, 1978, when more than 900 Peoples Temple members died in a murder-suicide by cyanide poisoning, and Congressman Leo Ryan and four others were murdered at a nearby airstrip. For months before that tragedy, Jones frequently created fear among members by stating that the CIA and other intelligence agencies were conspiring with "capitalist pigs" to destroy Jonestown and harm its members. This included mentions of CIA involvement in the address Jones gave the day before the arrival of Congressman Ryan."


"Mark Lane (born February 24, 1927) is an American lawyer and conspiracy theorist who has written many books, including Rush to Judgment and A Citizen's Dissent, two major books published in the immediate wake of the John F. Kennedy assassination that questioned the conclusions of the Warren Commission."

" In 1960, he was elected to the New York Legislature, serving in the New York State Assembly, where he served for one term with the support of Eleanor Roosevelt and Presidential candidate, John F. Kennedy. "

" In 1962 he ran for Congress in the Democratic primary and lost. In the 1968 presidential election, Lane appeared on the ballot as a third party vice-presidential candidate, running on the Freedom and Peace Party ticket with Dick Gregory."

"Lane applied to the Warren Commission to represent the interests of Lee Harvey Oswald, but the Commission rejected his request."

"Lane wrote Murder In Memphis with Dick Gregory (previously titled Code Name Zorro, after the Central Intelligence Agency's name for King) about the assassination of Martin Luther King, Jr., in which he alleged a conspiracy and government coverup. Lane represented James Earl Ray, King's assassin, before the House Select Committee on Assassinations inquiry in 1978.

"Lane was thought to be a screenwriter for the 1973 action movie, Executive Action, starring Burt Lancaster and Robert Ryan, but in actuality he only worked on the first draft of the screenplay."

among other misc items from link above...
Top

I just happened to take a look at some of the Jonestown photos of "the dead" today. I well remember this "event." It was a major news story and had an electrifying effect on the public at the time (1978).

Here are some of the photos I found ... 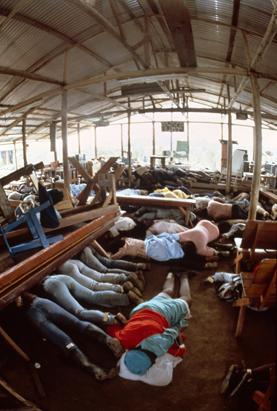 Many of the "bodies" are like this in the photos -- all neat and tidy and lined up side by side, mostly facing down, many resting their faces on their arms, some with an arm lovingly around another. All appearing to have "died" as gently and peacefully as can be.

These people supposedly died form drinking Kool-Aid laced with cyanide. Here is a description of death by cyanide from Time magazine:

"Cyanide suffocates. It stops oxygen consumption by body tissues. It is hot and bitter when swallowed, produces nausea and a splitting headache. The throat tightens, and the victim gasps for breath, reels, stares wildly without seeing, is seized by convulsions, and falls unconscious. Then, like an expiring balloon, his laboring lungs and heart slowly collapse...."
http://www.time.com/time/magazine/artic ... 37,00.html

Somehow the "dead" in these photos don't look like they were "seized by convulsions and then fell unconscious." They look like they all laid down and played sleepy-time for the camera.

Funny how these "horrifying" events turn into ridiculous bullshit when you actually look at them with an eye toward uncovering the fakery.
Last edited by lux on Sat Aug 24, 2013 1:09 pm, edited 6 times in total.
Top

And none erm "evacuated" in horrible painful death!

Evacuation :- Defecation and or urination, especially involuntarily after death.
Top

Before there were detailed, highly sophisticated, PR-informed computer generated sims, there was laying face down in a field for a few minutes. Damn, simpler times.

Seems like a fear-mongering tool that worked, given their successful goal of eliciting the jest, "Is it gonna be like Jonestown?" just about any time you mention an intentional community that tries to break from the Federal Reserve system or any other aspect of the serf system most of us are born into.

Or the tax system, or the mortgage trap, or the oppression caused by any number of other things people may feel slightly more uncomfortable with than they are with eating healthy in a neighborhood focused on freedom, community, happiness and contentment. Not saying communes are any better than cities or the pony-tail people dressed in white who give their children and assets to the 5th-dimensional guru are like a fantastic achievement of civilization, but it does seem like a wall of fear has been deliberately painted (in the public imagination) around our pathetic, polluted, cop-controlled, sad cities ... to make it seem like there is no alternative but crazy cults that will kill you.

I guess to keep people in order? Anybody remember Logan's Run?

I barely look that clean and tidy after lunch, let alone after a cup of freakin cyanide. Evidence of all kinds of bodily functional activity, puking , drooling etc should be entirely obvious but nothing and in spite of my deeply etched memories and beliefs around Jonestown this is BS and it makes me question everything about that event...
Top

The 1980 3-hour TV movie "Guyana Tragedy: The Story of Jim Jones" was a big deal at the time. I remember watching it back then. It won several emmies and put its star, Powers Boothe, on the map as an actor.

This is the usual followup to their major psyops -- they create a movie that "shows the events" and which creates a sort of public "memory" of it. It leaves the viewers with the impression that they saw it all happen, like they were witnesses to it. Later, when they look back on it, it's the movie they see in their minds like a sort of substitute memory, adding to the false reality of it.
Top

Here's more silliness from another Mae Brussell relation to the events.

Per the 'official' rendition of the story, it looks like a publication named New West was doing an investigative hit piece on Jim Jones but a few prominent businessmen were trying to get them to back off including Cyril Magnin, chief executive of the Joseph Magnin Co. Cyril Magnin was a cousin of Los Angeles based Rabbi-to-the-stars Edgar Magnin, who you may recall was Mae Brussell's father. Thus it appears that while Mae was calling out Jonestown as a CIA mind control experiment, her relative was, at least outwardly, one of Jones' more powerful supporters. Additionally, Cyril Magnin looks to have been well connected politically as his cousin Rabbi Edgar was.


He was Treasurer of President Franklin Roosevelt's northern California re-election campaign in 1944, a delegate to the Democratic National Convention in 1948 (that nominated President Harry Truman) and again in 1964, when he co-chaired the Finance Committee of President Lyndon Johnson's campaign in California.

...Throughout the 1950s and 1960s, Magnin was one of a quartet of fabulously wealthy San Francisco Jewish contributors to Democratic candidates, appreciatively called "The Green Machine" by career politicians...

The four did not always agree in their choice of candidates. Magnin himself was a major donor to the presidential candidacies of John F. Kennedy in 1960 and Robert F. Kennedy in 1968, and, in the interim, developed a close friendship with Lyndon Johnson.


Also, in addition to the amazing, conspiracy-theory-minded attorney Mark Lane highlighted at the top of this page, it looks like Jones was using the services of another remarkable attorney named Charles Garry.


For nearly all his 69 years, lawyer Charles Garry has been a rebel with one cause or another. The son of Armenian immigrants, he worked his way through law school at night and was a Depression socialist who began his legal career defending militant trade unions. In the 1950s he represented alleged Communists before the House Un-American Activities Committee—and refused to answer questions himself: "I told them to kiss my ass."

If you liked that one, this is priceless...


Then for a decade he served as the embattled chief counsel for the Black Panthers, defending Huey Newton, Bobby Seale and Eldridge Cleaver with such a flair for courtroom dramatics that one policeman, under intense questioning, jumped from the witness stand and pulled his gun on Garry.

And if you haven't cracked a grin or uttered a WTF by now, perhaps this one will do.


I think Jones intended to have us shot," says Garry, who was taken with Lane to a guesthouse as Jones' followers massed around the vat of poison. "Pretty soon two young men with guns at the ready came to us. They said they were ready to die and happy about it, because they were going to expose this racist, fascist society. Mark very quickly said, 'Charles and I will write about you.' I think that saved our lives. They said okay and hugged us. We bid them goodbye and left."


Lane and Garry, who was dressed in suit pants, dress boots and a stocking cap to keep out mosquitoes, started their trek through the jungle again the next day in pouring rain, marking their path with strips torn from Lane's underwear...

...I picked up a big piece of timber—it must have been 15 feet long. I had been a javelin thrower in high school, and I told Mark, 'If the guy inside has a weapon and attacks me, I will throw it at him and kill him.' When I got up to the place it was empty. I called Mark to come, and from there we headed straight to Port Kaituma."

Sounds like a pulp fiction you can pick up in a grocery store aisle. I guess at one point it may have been? When did these stories appear? The 70's? Later? Does the writer Dianna Waggoner have an uncommon spelling of Wagner?
Top
Post Reply
23 posts