The red sea of people?

Historical insights & thoughts about the world we live in - and the social conditioning exerted upon us by past and current propaganda.
Post Reply
First unread post • 19 posts

The red sea of people?

"If you were wandering through downtown Munich today, you'd have stumbled upon a spectacular sight."

Unless it wasn't real as nobody at all seems to be observing in the final photo. I know I'd stop and watch.

I've always been extremely skeptical about these mass nude artworks. Whilst there may be particular body-types that are attracted to taking all their clothes off in public (or ostensibly some form of 'audition'), I feel there's an unrealistic similarity between the general height & weight of these human pixels. Compare them with overtly (implicitly?) CGI television adverts for various pseudo-pharma products such as toothpaste or skin-cream, where the advert producers have spliced together thousands of clone-copied little surreal humanoids to effect the inferred illusion of many making one.

Similarly with many of the amazingly well-composed pictures of flash mobs that were popular at one time. I'm now motivated to look back for a few examples
Top

There was one in Sydney a few years back. From memory, the casting call went out a few weeks beforehand, and the shoot took place very early in the morning. I was tempted to apply, but figured I looked too freaky to fit in, plus I don't do early mornings...

The photographers website is here. You can click on upcoming shoots to see if there's one near you

MrSinclair wrote:"If you were wandering through downtown Munich today, you'd have stumbled upon a spectacular sight."

Unless it wasn't real as nobody at all seems to be observing in the final photo. I know I'd stop and watch.

Oh well, in many cases even faked, red-painted female nudes are worth seeing.
Top

After studying every nook and cranny to these images (all in the name of science. y'understand

Error Level Analysis @ 0.70 has been applied to the published images. This reveals a plethora of anomalies. These indicate deception from image composition.

In the first image, the upstretched arms at the back are at a notably different error level to the rest of the image. This suggests that the arms were added later. Evidence of very lazy fakery.

Note again the different regions at different compression levels. There appear to be three distinct regions to this image: (i) the bodies in the foreground, (ii) the bodies on the plinth (iii) the building background. In other words, this image is another fraud based on composition.

In this image too, there are distinct regions at different error levels, indicating composition. In particular, note that the energy level of the near foreground is uniform. Yet that region is at a very different level to the bodies along the plinth. Note also the pronounced line running alongside the bodies in the near foreground. Another clear sign of fakery.

While these fake photos are ostensibly harmless, they do serve as a gauge of our gullibility to fake crowd photos. Perhaps that is their real purpose? To see how much they can sucker us? To see whether we're wising to their frauds, their photo fakes and their video deceptions?

Perhaps these fake photos are Tunick's lighter output? Is he involved in faking similar crowd photos for more nefarious purposes?

There is a serious issue here: the ability to fake crowds is an important propaganda weapon of the Apparatus.

If the Apparatus can show through plausible photos that it has mobilised large numbers in its favour, that has a demoralising effect on critics.

Manufacturing photos and footage showing fake crowds on the streets has always been an effective way to manipulate public perception of your power and popularity.

Great work and analysis as usual from Reichstag Fireman.
I checked Youtube on the presumption that surely someone with a camera would have been at the scene and posted something. After all, virtually every event makes it way to youtube.
I found this, which is nothing, the text and photos from the article and that's all.

I also looked briefly at his "no briefs" photos at the website.
This one sure looks realistic to me.

*
I hate to sound like a grumpy art critic, but I frankly fail to see what the whole point of Tunick's human installations is - if what he does is photographing naked people in real locations ... only to successively play around with them in Photoshop?... It strikes me as a rather silly and senseless attention-seeking enterprise.

One thing is clear... this dude is a weirdo.
Top

The Dead Sea of People (Israel)

http://www.spencertunick.com/images/upc ... c14_s1.jpg
To me, these people appear far too 2D, unrealistically lit (certainly within the context of their supposed location), and excessively straight-on to the photographer. Depth of field/focus is also very odd...it's a surreal decoupage.

I'm reminded strongly of a 12" LP record album cover design...possibly the band 'Yes' , from the 1970s, will confirm that.

This guy's output also suggests to me the work of Anne Geddes....not that she's ever used photo-manipulation techniques...much. 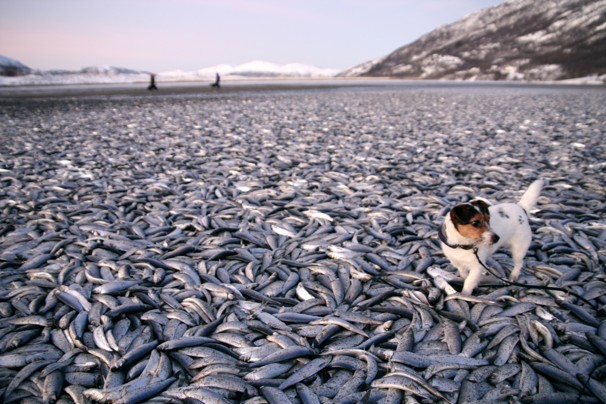 simonshack wrote:*
I hate to sound like a grumpy art critic, but I frankly fail to see what the whole point of Tunick's human installations is - if what he does is photographing naked people in real locations ... only to successively play around with them in Photoshop?... It strikes me as a rather silly and senseless attention-seeking enterprise.


I look at it like a music remix. Some people, for what ever reason like to play around with the product and change it into something else. But, I think there is a very fine line between art / aesthetics, and deception in both music and photography.
Top

Those naked folks sure get around! Or maybe they´re just natives recruited during an early morning Spaziergang along the edge of the Aletsch.

The shooting took place in the framework of an environmental campaign about global warming.

Reminder to self: Navigate to Subforum Page before clicking.
Top

I have just been banned from Fotoforensics.com for 3 months for uploading one of Tunick´s loony "installation" pictures! How cool is that!