Could this be another "frana" simulation? Simulated international cooperation through the miracle of NASA? Or is this just a real story about 33 unlucky men stuck in a deep hole with a camera phone?

It seems to me that if they can get video cameras and a "home theatre system" down in the hole at "Camp Hope" they ought to be able to send down food and supplies, but hey, I'm no NASA mining expert.

With NASA, video, 33 men singing the national anthem, and the president's announcements causing the entire nation "to erupt in an outburst of patriotic fervor", I have a few doubts.

COPIAPO, Chile (AP) -- The 33 men awaiting rescue in a mine in Chile have made a video showing them in their surroundings. The shirtless men are slim but appear healthy, and at one point link arms and sing their national anthem. They made the video with a small camera sent down to their underground shelter through an emergency shaft.

(NECN) - Mine officials in Chile hope to begin drilling on a rescue shaft tomorrow or Monday.

They also hope to carry about a Plan B to get the miners out who have been trapped since early August. The idea involves widening an existing bore hole.

However, still under the best case scenario, the 33 trapped miners could still be underground for at least two more months.

Also, a four person team from NASA is on the way to survey the situation. The team includes two physicians and psychologist. They plan to arrive next week. The Chilean government asked for their help in providing nutritional advice and behavioral health support to the miners.

Just yesterday, the miners' families were able to see their faces on a 25-minute long video tape the men sent back up to the surface.

With Nasa urging the use of entertainment, the Chilean government is planning to deliver movies and videos of football matches to the miners, who will also be given a home theatre system.

Meanwhile, a nation watches and does what it can to help. In this lost corner of the Atacama desert, one of the world's driest spots, it is as if Chile had suddenly sprouted flags, tents and crude shrines to the 33 men. A spirit of solidarity has descended upon this rocky no-man's land. Without a formal petition for aid or a website, volunteers throughout Chile arrive to bring support ? moral, physical and monetary ? to the families of the trapped miners.

"The country has shown a unity regardless of religion or social class. You see people arriving here just to volunteer, they have no relation at all to these families," said Ivan Viveros Aranas, a Chilean policeman working at Camp Hope.

President Sebasti?n Pi?era has taken a flamboyant front-row stance in the crisis, projecting a never-give-up attitude that resonates heavily with Chileans who often feel that the government ignores the immediate needs of the poor and working class.

One week ago, when President Pi?era made the now historic announcement that the 33 miners had been found alive, the entire nation erupted in an outpouring of patriotic fervour. Drivers honked their horns in a cacophony of celebration, while hundreds of joyous Chileans rushed to Plaza Italia, a central roundabout in Santiago often used to celebrate football victories.

At every new development of the mining saga, Chileans are pulling together in a sense of national unity that has catapulted Pi?era to high rankings in opinion polls and levitated Lawrence Golborne, the formerly anonymous mining minister, to such fame that he is now jokingly referred to as "Lawrence of Atacama".

Like a fantastically popular soap opera, the audience for this saga grows daily ? a new language has entered the national consciousness as words like "sonda" and "palomas" became topics of spirited debate. Would the sonda ? borehole ? find the men? Will the palomas ? small tubes used to send messages and food ? be fast enough to keep the men nourished?

In one of the early conversations with the miners, a spontaneous singing broke out ? all 33 miners, hearty and proud, unleashed a rendition of the national anthem that crackled and groaned from the depths of the mine. It was a chorus of strength which had half the nation in tears and guaranteed that, when Chile celebrates the national bicentennial on 18 September, it will have a new group of national heroes.

lol. Let's hope NASA rescues the brave men in time for the national bicentennial. If you can't trust business, government, NASA, and the international news media then who can you trust? I'm sure a respectable rag like the Guardian wouldn't print this story if it was just a bunch of cheesy propaganda.
Top

I saw a segment on CNN about this full of computer simulated bs and my immediate thought was - they probably just dug a hole in the ground and made it into a filler story. These guys supposedly have been down there for 3 months or something? not buying the BS. Nasa is involved? In Chile? Rescuing miners? wtf? Nahhh...... :rolleyes:
Top

If these people keep digging into South America while their 9/11 story is falling apart, they are going to get chased there and never be allowed to return to the USA. Send the Clintons too. We're done with 'em.
Top

Or maybe the trapped miners story is intended to divert attention from this issue involving the Chilean Government.

antipodean 4 Aug 29 2010, 05:56 PM wrote: Or maybe the trapped miners story is intended to divert attention from this issue involving the Chilean Government.


From your second link:


The demonstration in support of the prisoners is part of an international campaign which is pressurising the Chilean authorities to withdraw anti-terrorism legislation which was first enacted by the Pinochet regime. This anachronism is entirely incompatible with the state’s supposedly democratic character, as two detainees who recently joined the hunger strike have recognised. Carlos Mu?oz Huenuman Painemil and Eduardo Pea therefore observe that the state, its ostensible concern for democracy and the rule of law notwithstanding, is enacting a ‘political and judicial farce’.

At present, anti-terrorist law 18.314 permits dual trial by military tribunals and civilian courts, the use of ‘faceless witnesses’ and detention for indefinite periods of time. The law has been exclusively targeted against Mapuche communities for the past decade. For this reason, amongst others, the Ethical Committee against Torture has called for it to be withdrawn.

MIL has mobilised in response to the sacrifices of the prisoners, who continue to stand in defiant opposition to the state’s continued denial of their political rights and freedoms. MIL’s General-Secretary, Reynaldo Mariqueo, recently declared his solidarity with the prisoners when he led a delegation, which included political prisoners formally incarcerated by the Pinochet regime, to the Chilean embassy to formally register his opposition to the state’s indiscriminate and widespread use of anti-terrorism legislation.

This event, which marked the month which has passed since the hunger strike first broke out on July 12, was intended to highlight the ‘International Day of Solidarity with the Political Prisoners on Hunger Strike’ which MIL had called for. Both this event and today’s demonstration reaffirm our solidarity with the prisoners and their cause. This solidarity is encapsulated in our demand that the Chilean government:

Negotiate with the political prisoners
*

Ensure the observance of due legal process

Both events are part of the broader ‘Campaign for the Defence of Human Rights of Mapuche Political Prisoners on Hunger Strike’, which is supported by Mapuche groups from across Europe and the wider world. The hunger strike also enjoys a substantial level of support within the Mapuche community itself; several demonstrations in cities across Chile have already expressed their solidarity with the political prisoners.

This past year so far:

U.S. troops being stationed at the Mexican border. The corporate takeover of Honduras with the ousting of Zelaya (basically with the support of the U.S.). The U.S. military invasion "invitation" of Costa Rica. More U.S. bases in Columbia. What am I missing, and what's next?
"It's not a matter of what is true that counts but a matter of what is perceived to be true." - Henry Kissinger
Top

U.S. troops being stationed at the Mexican border. The corporate takeover of Honduras with the ousting of Zelaya (basically with the support of the U.S.). The U.S. military invasion "invitation" of Costa Rica. More U.S. bases in Columbia. What am I missing, and what's next?

Oh yeah, I forgot about the U.S. military invasion of Haiti. I assume they are still hanging out there.

I also believe that U.S. blackops are involved in the Mexican "drug wars". Many of these killings occur in regions that have had very strong and recent socialist revolutionary movements. I think movements of common people of Central and South America who are vociferous about wanting to operate their own governments are being systematically persecuted, murdered (at least those who are leaders or those who display real threats of revolution to the fascist regimes), and isolated from growing in unison as a powerful socialist confederation of common folks, wanting their independence from the dictates of the western corporate imperialists and their fascist elitist puppets that are always placed into power.


Edit: But what could NASA setting up in Chile mean? I'll speculate wildly :P NASA is there to install some kind of new sensors so that satellites can better track movements of large groups of indigenous people across regions, so that the Chilean government can be informed on how to proceed with their persecution, and keep people from uniting. Now you can all correct me on my lack of technological knowledge :lol:
"It's not a matter of what is true that counts but a matter of what is perceived to be true." - Henry Kissinger
Top

I think movements of common people of Central and South America who are vociferous about wanting to operate their own governments are being systematically persecuted, murdered (at least those who are leaders or those who display real threats of revolution to the fascist regimes), and isolated from growing in unison as a powerful socialist confederation of common folks, wanting their independence from the dictates of the western corporate imperialists and their fascist elitist puppets that are always placed into power.


Here are two good articles giving background on U.S. intervention in Latin America recently. The first describes the 'threat' to the US, the second describes the US response - in all its bad faith, malignant glory.

Neoliberalism and the Dynamics of Capitalist Development in Latin America

I came across this update on the Chilean mine story.

The joyful and patriotic Chilean miner chaps pose for the camera, and will keep their spirits high with expectations of being freed in early November at the earliest. 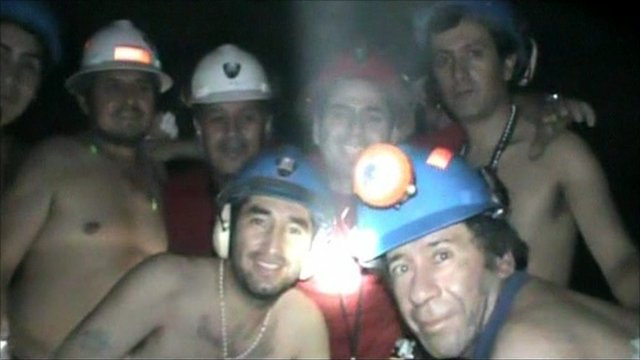 My goodness, don't those actors [miners?] all look so shockingly thin and pale from being trapped for months underground.

At least their NASA home theater system and the imported team of psychologists are keeping their morale high. Thank God they're all patriots and not anarchists. Can you imagine how terrible it would be to be trapped in mine full of left-wing complainers and pot smokers?

If this story isn't pure simulation, the Chilean government certainly seems to be all over it for psyop purposes. But I think the story is just a made-for-tv miniseries.
Top

obrien sent this little tidbit about the trapped miners.