More silliness just released to 'support' the official narrative, in all its fabricated glory - and absurdity. Does any of this 'new' misleading crap help our analysis?


London bombs were meant for a different day ? and different locations

Were it not for the fact that the wife of one of the bombers was taken to hospital with pregnancy complications, the plot would have gone ahead a day earlier, the court was told. It also emerged that the four bombs were originally intended to go off at Bond Street, South Kensington, Paddington and Westminster stations ? but the bombers' train to London was delayed.

The details of the original plan were revealed at the opening of the long awaited inquest into the deaths of the victims yesterday. The hearing, at the Royal Courts of Justice, was resuming after a three-year adjournment due to criminal cases connected with the plot.
...
The detonation of the fourth bomb by Hasib Hussain was delayed because he forgot to bring the batteries for his detonator and had to buy some from a WH Smith store outside King's Cross, he added.

Mr Keith explained that the intended targets were revealed in a note inside Lindsay's passport, found in a Piccadilly line tunnel. CCTV footage of the men showed that they had carried out reconnaissance at South Kensington a week before the attacks.

Speaking about Tanweer, whose bomb exploded at Aldgate, Mr Keith said: "Had the train from Luton not arrived 24 minutes late, it is conceivable that Tanweer might have made it to Westminster via the eastbound Circle line by the detonation time of 08.50." Discussing Lindsay, whose explosive went off at Russell Square, the QC added: "From the reconnaissance trip on 28 June, it's possible to speculate that Lindsay was intending to get to South Kensington but was delayed on the Piccadilly line."

The court was also told of an incident on 7 July which may have suggested that one of the bombers had second thoughts. A London Underground employee said that a man resembling Lindsay approached him at King's Cross and said he wanted to speak to the duty manager about something "very important", but disappeared before the manager arrived. Mr Keith played down the significance of this, explaining that the employee said he thought this had happened at 8.15am. The bombers did not arrive until 8.23am.

Fbenario: I believe a 7/7 thread is an absolute must on the Public Message Board. Thanks for starting it. That article you linked to is truly horridly absurd...

reel.deal : Yes, there are NO bloodstains to be seen on these supposedly bombed out carriages. I have spent the day looking at the London bus which supposedly claimed 13 lives at the Tavistock Square. Will make a post about that tomorrow.
http://www.septemberclues.info
Top

It's early morning, I'm a suicide bomber leaving Leeds. Apparently I am totally pissed off at George Blair and Tony Bush who are meeting a couple of hundred miles away, to the North. To the South lies London and the London Underground where I will detonate my Argos Suicide-Pack. All those people who protested the war will be my victims. That'll show them! They can't fuck with Allah!
Top Ah well, the Terror movie ad on the side of the bus is not proof of anything -
just pure, happenstance synchronicity, surely...

But let's take a look at the type and model of London bus which
was supposedly blown up by a terrorist bomb on 7/7 2005. Here it is: And here is the "beheaded" London bus at Tavistock Square: [/b] Now here is when it gets interesting: Here we see the "beheaded" bus in the immediate aftermath of the bombing. Remember that we were told by BBC that 13 people died in this bus - and that most of the blast affected the top deck of the bus. This historical picture truly shows the crude violence of the blast and the almost unbearable pain of the stunned survivors (captured by a swift, lucky photographer) still gathering their senses after the blast. One has what seems like a bad nosebleed. Another blond guy (or girl) has a horrific cascade of blood running down his/her face. The sheer horror of these gory pictures leave us all petrified and disgusted by the vicious cruelty of AL-QUAEDA and their barbaric antics...In fact, the entire World was shocked by this TERROR ATTACK in the city of London!... However, at a closer look, we see that this bus has been "beheaded" with a circular saw. In fact, when you think about it, how did a bomb detach the entire roof of the bus in such a neat, linear fashion? Do you really need to be a bomb expert or a 'rocket scientist' to see how very stupid this is?


This other photo shows 4 yellow bars sticking up from the upper bus deck. Unfortunately, the two yellow bars on the left don't seem to exist in the previous pictures. Now, you may wish to believe that they are obscured by the wounded victims (due to 'perspective issues'). Uh, well - it's all up to you ! It's game over, as far as I'm concerned. Anyone still believing these were "Al-Qaeda attacks" is simply disinformed.
http://www.septemberclues.info
Top 
Esther Hyman (who recently registered on this forum) is going to tell us what she thinks of those bus pictures, Is everyone allowed to make comments about the pictures, or it is only for Esther?


I hope my untrained comments will not spoil it for her.

In both pictures, the bus appears about the same size and from the same perspective.

But the pillar-box is much further away in the second picture...

So you think: Well the bus must have been moved.
Except you then look at the road markings and see:
No, the bus has not been moved.

Surely if the two photos are inconsistant, then at least one of them is faked.
Why would they they bother to fake even one if the scene was real?

Trivia:
The first picture is by Peter Macdiarmid: 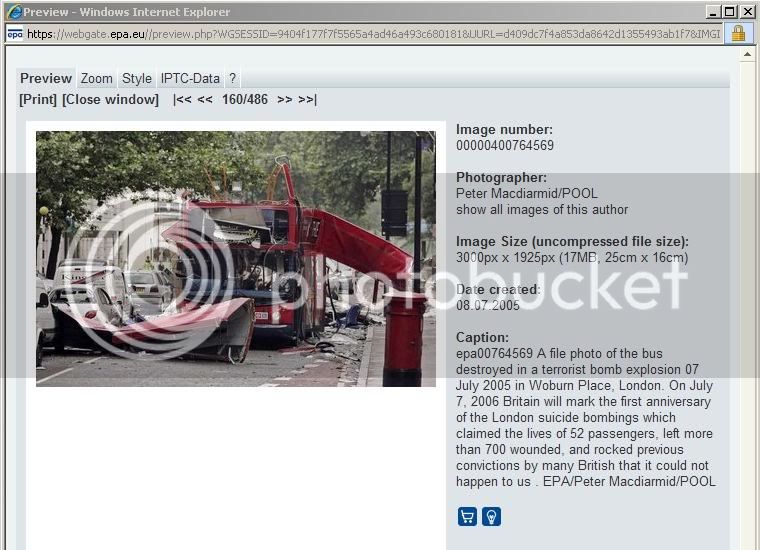 Missing Posters
Mr Macdiarmid is famous for being the collector / guardian of so many 7/7 missing posters:

Oh!
Here's another one by Peter Macdiarmid, (impossible bus picture photographer?):
It shows a photographer placing a missing poster!

They could have selected two images with the same colour balance at least.

If you look at brianv pic of the bus you'll notice the back end of it is bent INFRONT of the bus stop sign, but on simons pic it shows it behind the sign!
Looking at the same sign, the pole finishes just above the sign, but simons (ahem) pole doesn't end!
The seats that are on the pavement are only in one pic, as is the zebra crossing light!
You can only see through the bus in one pic!
The bus roof has been moved and is missing a bit of pipe on the right!
Debris has been moved from the front right of the bus!
Tree foliage has been inserted above the bus and an orange upstand has been removed ( diagonally )
The bottom of the post box is flat ( could be the angle )
Cars on the left have been moved/ taken away!
No blood, no bodies and no scorch marks or melted plastic! No evidence of any fire, no matter a bomb!
Top

Hey, I was waiting for Ester! And now Timothymurphy and Brianv have tried to scare her off. Don't be afraid Ester. Come do your voodoo.

All I can add is that Macdiarmid is missing a yellow beacon to the right. It could be behind the bin, but there's a post missing from the same area which is behind the bus flap in the blurry pic. The black rubber seal running up to the saw-damaged post continues up into the heavens in the blurry pic, and the saw-damage is missing! There's also an extra little yellow pole on the upper deck. That blurry pic is weird, and I can't get a handle on exactly how the two pics relate. Seems 'photographer' has moved a few degrees left for the blurry one, but the background has gone through a major change, like foliage has gone crazy.

Amazing discrepency in the other pics, with bus flap infront/behind the sign, well noted by bruce (above). Explain that!
Top

When the bus prop was being dropped into place, off the back of a large truck maybe, someone forgot to remove the restraints.

The chrome bar is outside the "bus" and extraneous and looks like it could be part of a lifting aparatus!?

any signs of fire or heat?

Shouldn't there be parts of people scattered everywhere? I would have expected a rather gruesome scene with a dirtier bus.

It all looks rather neatly disassembled.

Shouldn't the seats be a little more lived-in looking? You would think someone would have spilled a cup of coffee or lost a little blood at the scene of such a major hoax... er, um, "terrorist attack."

Look what a mess a standard car crash is, or how awful it is when a dog or a person gets run over. It's unpleasant. This looks like it should be installed in a museum.
Top

The Tavistock bus in the photos has plastic seats.


It is a touristic sightseeing open roof bus!

Virtually all the victims boarded the bus at Euston station, (or it's not stated exactly where they boarded) which would have been the last stop before it's unscheduled detour. (instead of turning right it should have carried on down Euston road.)

Peter Power stated that the exercises involving Visor were being carried out at the same mainline stations involved in the bombings.

Maybe this No. 30 bus was part of one of his exercises, departing from Euston Station. With a few actors on board, which could explain why none of the bus occupants look overly concerned.
Top
Post Reply
167 posts