Blast at the Domedovo Airport in Moscow

Discussing the most relevant "sequels" or "reminders" of 9/11. The so-called "War On Terror" is a global scam finalized to manipulate this world's population with crass fear-mongering tactics designed to scare you shitless.
Post Reply
First unread post • 51 posts

Russian authorities on Saturday announced that they had identified a 20-year-old native of the North Caucasus region as the suicide bomber who killed 35 people at Domodedovo Airport’s international arrivals hall — a location chosen specifically because it gave the opportunity to kill foreigners.

from the NYT. Is this basically the russian equivalent of the lone gunman?
Top

I think Russians have been playing with terror long before anyone else. They use it for their own wars, like Chechnya, and for their own transitions of power. I don't think Russians will ever help the War on terror. They can help indirectly, though, just like the Chinese, by using the same methods for their own purposes while never betraying what they know about media fakery. I don't think relations between Israel, US on one side and Russia on the other are that great right now. Russia is mostly on the Euro side, since Europe depends on Russia for energy. Different pyramids, in my opinion.

Yeah, very well that can be the case. I remember the 2nd chechen war started with some dubious Moscow house bombings, too.
I am wondering if the Russians will only use the event in-country, to achieve some propaganda aim on the home front, but I have no real information on the Russian internal politics, we will see (but I still enjoyed speculating).
Top

warriorhun wrote: I remember the 2nd chechen war started with some dubious Moscow apartment bombings, too.

That one was a disastrously managed psyop...

Aleksandr Litvinenko - who, as the story goes, "knew too much about it" - was assassinated in London by 'polonium poisoning'...
TERROR 99 (good website now seemingly dead)
http://eng.terror99.ru/

Short summary of that sordid affair : A few apartment buildings around the Moscow area were being blown up at night within a short period of time. In Ryazan, however, the FSB (Russian CIA) was caught red-handed placing military-grade explosives in the basement of yet another building.
The next morning, the FSB chief goes on TV and explains it was just "a training exercise (drill)" to keep the FSB under alert...

Even Wicked Pedia has some decent stories about this...and THAT'S saying something:

According to Johann Hari, "the FSB is simply the renamed KGB, whose raison d'etre for decades was essentially institutional terror in the service of the government. Putin is himself an ex-KGB man, and he has twice blocked, through the Duma, any independent investigation into the bombings. No evidence of Chechen involvement has ever been forthcoming, and the Chechen groups have claimed that they were not responsible — although they admit to other acts of violence. The Ryazan "training exercise" excuse is preposterous. It does seem to suggest that the Russian secret services were caught red-handed".

And let's not forget the other horrid terror operation smelling of fakery, the take over of the school in Beslan, and the massacre that supposedly followed, with mothers forced to pick which one of their children had to survive 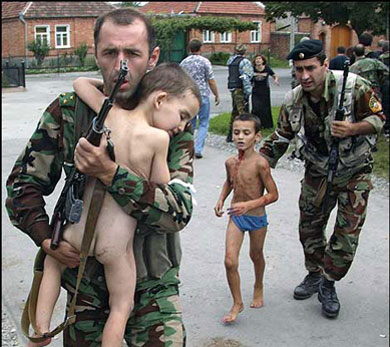 simonshack wrote:Aleksandr Litvinenko - who knew too much about it - was assassinated in London by polonium

Thanks for reminding me this story! I always had the feeling that his poisoning and death was all a farce. An anti-Putin operation, just like the killing of Anna Politovskaya (after squashing the Eltsin golpe and pushing the oligarchs out of the country, Putin has had many enemies). Maybe even a "sim" operation (it happened in London far from the control of Russian media). At least judging by the absurd pictures of him at the hospital, and the use that has been done of them http://www.newstatesman.com/world-affai ... -alexander

I understand a false flag attack is a general ruse of starting a war (like the gleiwitz radiostation attack fakery to justify attacking Poland by Germany in WWII). The Moscow houses attacks tie in here nicely.

I understand false flag attacks and massacres by pseudo-terrorist gangs (either faked or real) is good propaganda tool for demonizing the enemy and strengthening our morals. I bought into the beslan attack at first- terrorrists bribing their way in-country, loser local cops messing up escape attempt sounded realistic for me. But the youngest terrorist to survive to get a trial shows similarity with the mumbai false flag similar script.

Nonhocapito, let us not forget the Soviet leadership always co-operated with the West, and KGB people remained in FSB. Let us not delve on these peoples religious or racial beckground. Still, the old connections are there, maybe the Khodorkovsky case and the likes did not help Russian connections with certain other countries, but this operation may help to build a bridge. But there you go-I am speculating again. Lets wait and see. In a month or two we will see where the events are heading and we may will be able to identify the target of the psy-ops of the Moscow airport terror fakery.
Top

I hope one of the following two links will reach the up-loaded video of the muslim terrorist leader bragging about organising the Domedovo blast, and promising more to come.
As I thought, some "Al-Qaeda" linked group from the Caucasus.
I am not saying he is a sim, it is worse than that: it is simply faking reality, and insulting my intelligence.

Why do I say that? Because the whole effing point of guerialla warfare, let alone terrorism is anonimity and secrecy.
If you are the leader, you know each cell who do not know each other, all the plans. During torture on sunny Guantanamo, they are not asking for your fancy plans how you want to introduce Sharia in mainland USA, all they ask for during waterboarding is: names, names, names. But first, there must be a first guy to ask, who we know for sure is guerilla.
And how do you go about in the Caucasus, through checkpoints, organising attacks, when every contractor and police knows your sorry face? There are Russian UAVs in the sky, the operators through the UAV camera can recognise your face with a program comparing it to your video picture I suppose. You can not even use your brainwash techniques on those widows to carry out suicide bombings, they will know what you are up to before you utter a word and they run away laughing at you!

So, an "Al-Quaeda" terrorist leader uploads bragging and threatening terror videos only under the following three circumstances:
1. If he has the highest security clearence from the security forces
2. If he is a paid actor.
3. Both of the above
Top
Post Reply
51 posts