Anything on the news and elsewhere in the media with evidence of digital manipulation, bogus story-lines and propaganda
Post Reply
First unread post • 18 posts

I have seen an explosion that looks a little weak to me: http://www.abcnyheter.no/node/121452?autoplay=1
Top

I have seen an explosion that looks a little weak to me: http://www.abcnyheter.no/node/121452?autoplay=1

Convenient too that they actually "captured" it on video!!

“Korean Conundrum: Is There a Way Out?

Latest incident a provocation – but by whom?

Initial reports were unequivocal: those crazy North Koreans had once again broken the longstanding ceasefire and attacked the South, this time at Yeonpyeong Island, shelling civilian quarters, and killing two South Korean marines. A few hours later, however, a more nuanced story came out: it seems the South Koreans were conducting military “exercises” near the disputed island, which North Korea claims as its territory, and South Korean ships had opened fire, albeit – they claim – not in the direction of the North Korean mainland. The North Koreans responded by taking it up a few notches, as is their wont, and opening fire on Yeonpyeong.

Yet the headlines in the Western media belied such subtleties: “World Condemns Deadly N. Korean Artillery Attack,” blared CNN, while the War Street Journal declared “US Envoy: N. Korea Initiated Artillery Exchange With S. Korea,” and ABC News dutifully reported President Obama’s “outrage” over the attack. The smoke had barely cleared above Yeonpyeong before Western analysts were coming out with various “explanations” for what was characterized as a burst of unprovoked North Korean “aggression”:

* The tenuous nature of the North Korean succession, which will install Kim Jong-il’s young son, Jim Jong Un, as the absolute ruler of the Hermit Kingdom.

* North Korea’s “desperation” and the regime’s nature as an inveterate “aggressor,” according to the Huffington Post.

* The influence of anonymous “military hard-liners,” who are eager to preserve their own power and maintain North Korea’s “military first” policy.

Yet a simpler explanation is readily apparent: the military exercises, code-named “Hoguk,” involving all four branches of the South Korean armed forces and some 70,000 troops, simulated an attack on North Korea, and were meant to provoke the North Koreans, who responded as might be expected. US troops were supposed to have participated in the exercises, but apparently the Americans thought better of it and pulled back at the last moment – perhaps because they knew a provocation was in the making. (These exercises, by the way, have been bad news for the South Koreans from the beginning, causing a series of accidents and killing six so far, not including the two marines killed on Yeonpyeong.)

If anything I would think it would be world powers trying to use this to intervene and unite NK and SK before Kim Jong-un comes into power. Maybe China finally doesn't care.
Top

guivre wrote:If anything I would think it would be world powers trying to use this to intervene and unite NK and SK before Kim Jong-un comes into power. Maybe China finally doesn't care.

Kim Jong-Un was apparently educated at the International School of Berne, Switzerland, so he is very likely a controlled puppet of the banksters at the very top of the perp pyramid. If so, he wouldn't constitute a threat to anything (other than his own people, who will continue to starve).

I agree with you that the world wants the two countries to unite; however, the reason for this desire is NOT because the world is scared of this nonentity coming to power. If it weren't for U.S. interference/control/bad faith, they would have reunited a long time ago. China is not one of the countries pushing for unification because it doesn't want U.S. troops on its border.

Kim seems to be in a similar situation to Obama, in that he is being placed in power by the perps to do their bidding.
Top

Jim Corr said that South Korea recently rejected a world bank proposal by closing their capitol for seven days in boycott/protest. If I understood correctly. I wonder if this could be some kind of retaliation? Could the cartel be suggesting that North Korea play 'attacker' so they can 'offer help' to South Korea in order to pressure them into more cartel-helping decisions such as monetary and military decisions that the bankers can profit from?
Top

I did not want to start a brand new thread on the recent North Korean developments, so I just post this here. (I seem to remember us discussing the fake artrillery attack on that North Korean island sometime ago at length, but I was unable to find that topic.)

So, Our Great And Beloved Leader, Our Benevolent Father, Stalin, sorry, I mean Kim Jong-Il (R.I.P.), is dead. NOOOOOOOOOOOOOOOOO...( Darth Vader's voice in the new edition of Star Wars here

Do fake mourning by the working masses, live on TV, count as media fakery?

Of course those tears are very real. We from former Communist countries know (at least our grandparents told us about the exactly same situation when Stalin died): in your secret heart you cheer, but if you do not cry out in the open, the person next to you will snitch you off for not being devastated enough about the death of the Great Leader, and that's a trip to G for Gulag you counter-revolutionary fascist kulak, you!

Of course, for anchorpersons on state TV, this comes naturally:

But we do not remain orphaned long. Long live Our New Great Leader, Kim Jong Un! 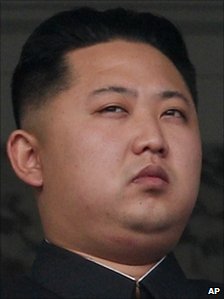 Very symphatetic guy, isn't he? The steering wheel of the state is in safe hands, the heritage of the one and only Kim Ir-Sen ( who was quite a piece of work, mind you) will not be squandered lightly. Also it seems that the conclusions drawn on the XX.th congress about the cult of personality were kind of lost on these sorry bunch of lunatics. Probably Kim the Elder did not bother to mention the XX.th Congress to his devoted Party and nation back then.

Kim Jong-Un was educated (trained? groomed for office?) in Switzerland. Same place where Lenin got the same...Hm... N.W.O.-man perhaps?
The Chineese must have OK-d the guy, otherwise he won't be there where he is.
Any thoughts on the recent developments in North Korea?
Last edited by warriorhun on Tue Dec 20, 2011 10:11 pm, edited 1 time in total.
Top

This would be the 3rd generation "leader" to come out of the same family. You gotta wonder how can communist leadership be so hereditary. They are a joke even by cult-of-personality standards of communists regimes. You can read on Wicky a description of the burial mausoleum of the previous leader, Kim Il-sung: http://en.wikipedia.org/wiki/Kumsusan_Memorial_Palace

Anyway: 2011 was the year when so many of these old-school leaders or figures of "evil" were taken out of the picture. I honestly cannot imagine to what end, but it is difficult not to imagine that all these events (especially Osama, Gaddafi, Mubarak, Kim) are connected in some way.
Suppose that Kim Jong Il was "taken out". In this case there should be a noticeable regime change now. Otherwise what would be the point?

I don't know what to think, really.
Top

The funeral procession for Kim Jong-Il was carried out with military precision and when a handful of dawdlers messed up those regimented lines, they were eliminated. From the photo, that is.

A photo released by the North Korea's state news agency and transmitted by the Germany-based European Pressphoto Agency is slightly different from a photo taken at nearly the identical moment and released by Japanese agency Kyodo News.

The Japanese picture captured a half-dozen men near a camera on a tripod lingering behind the line of mourners on the left side of the boulevard as the motorcade passed by.

In the photo by the North Korean Central News Agency, those men, their camera and their footprints have been digitally removed, restoring absolute order to the crowds lining the boulevard as the cortege passed by.

The alterations were discovered by the New York Times with the help of digital forensics expert Hany Farid of Dartmouth College.

The European Pressphoto Agency, which distributed the doctored North Korea photo, issued a "mandatory kill" for its clients, meaning they were not to use the picture.

The agency granted an exception to ABC News "for the sole purpose of being able to show and explain what had been altered before the picture was provided to international news agencies by KCNA [North Korean Central News Agency]. We consider this as part of a transparent and responsible clarification process."

Earlier today, we published a story on the doctored North Korean photo that erased, for some reason, a group of six men from a picture of deceased dictator Kim Jong Il’s funeral procession. It’s been our top story most of the day. So when we story the story about the “giant” showing up at the same processional, we thought we might be bringing you yet another example of a doctored photo. But after looking into it, it seems a giant man did actually show up for the ceremony.

Before we discuss the merits of the photo, take a look at it for yourself:

Not the caption associated with the photo — it’s an official Associated Press picture. Still, maybe you’re not seeing the very tall man in the center of the photo. We’ve decided to blow it up for you to get a better look:

See him now? He’s right to the left of the first flag pole. Gawker lightens up the picture in case you’re still having trouble seeing it:

So who is the man in the photo? Gawker, which originally thought the photo was a fake, did a good job of reviewing the possibilities behind the man they called a “giant:”

Reddit users speculate that the man is 7′ 9″ North Korean celebrity giant Ri Myung Hung. Once named the tallest man in the world by the Guinness Book of World Records, Ri is North Korea’s only internationally famous basketball player. He tried to play in the NBA in the late 90s, but was prohibited by the State Department, probably because they knew he’d destroy all our comparatively miniature American basketball players.

There you have it. Who would have thought that the photo involving the six men and a camera crew would turn out to be a fake, while the one possibly involving a giant basketball player would end up being real. In a North Korean world, I guess it just makes sense.

*******
Admin notice: Reel Deal, I've re-uploaded your 2 above gifs on http://www.septclues.com
Strange bug, this : when putting

around your postimage.org urls, they just won't show up.
Nonhocapito, could it be due to some problem on our side (some odd forum setting) ? simon
Top

Sorry, the website:www.septcues.com cannot be found