Egypt 'Revolution'- all the way to Libya 'War'

Anything on the news and elsewhere in the media with evidence of digital manipulation, bogus story-lines and propaganda
Post Reply
First unread post • 716 posts

[I have split the posts relative to Marie Colvin into a new thread: http://cluesforum.info/viewtopic.php?f= ... &p=2365645 ~nonhocapito]
Top

So, as expected: the situation in Libya is inexorably turning into a post-Yugoslavia post-Somalia kind of situation.

Now we have to wait and see which will be the first scumbag western nation to immediately "recognize" the autonomous state, like they did with Kosovo and all the others. And we can only try to imagine what will it mean for the Mediterranean to have a permanently unstable/unlawful area right in the middle of it, haven for drug, slaves or weapons smuggling. The global gangsters will be happy for sure...
Top

As noted earlier, this issue was part of the bigger issue that connected the whole Lybian war with Italy's recent globalist transformation (the riddance of Berlusconi and the diminishing of Italy's relevance in the Mediterranean):


The most valuable single item seized was a 1.26% interest in Italy's biggest bank, Unicredit, worth more than €600m (£502m). Other significant shareholdings included stakes in the oil and gas giant, ENI, the defence firm Finmeccanica and two companies in the Fiat motor group

This was made at the request of the international criminal court in The Hague. Yes the same authority responsible for the tearing apart of Yugoslavia, the scapegoating of the Serbians, and the creating of the drug-weapons-slaves smuggling haven called Kosovo. Great work they do.

nonhocapito wrote:This was made at the request of the international criminal court in The Hague. Yes the same authority responsible for the tearing apart of Yugoslavia, the scapegoating of the Serbians, and the creating of the drug-weapons-slaves smuggling haven called Kosovo. Great work they do.

... and the imprisonment of the "local leaders" of the 1994 Rwandan genocide (planned and set in motion by the U.S. and France).
Top

Here are some examples of how german TV station uses false pics and movies, to "prove" their statements.

Gag alert! This is so funny I can't stand it. It reminds me of those short instructional advertising videos you are forced to listen to on the plane before take off.

"Chris was committed to advancing America's values and interests, even when that meant putting himself in danger," Secretary of State Hillary Rodham Clinton said Wednesday in a statement posted on the official Facebook page of the U.S. Embassy in Tripoli.

US Consulate on fire.


The attack on the consulate was believed to be related to a trailer for Bacile’s two-hour film “Innocence of Muslims” that was posted on YouTube and enraged conservative Muslims for its claims, among other things, that Muhammad approved of child molestation, and its depiction of Muslims as terrorist thugs.

Bacile told the Associated Press he made the film for $5 million, raised among private donors. The trailer depicts scenes with amateur actors reciting stiff dialogue about the sins of Muhammad, according to the AP. "Islam is a cancer, period," Bacile said.

Though Bacile was apologetic about the loss of life as a result of the outrage over his film, he blamed lax embassy security and the perpetrators of the violence.
"I feel the security system [at the embassies] is no good," Bacile told the AP. "America should do something to change it."

A consultant on the film, Steve Klein, told the news service that the filmmaker was concerned for family members who live in Egypt. Bacile declined to confirm that.

Klein said he helped Bacile make the movie but warned him that "you're going to be the next Theo van Gogh." Van Gogh was a Dutch filmmaker killed by a Muslim extremist in 2004 after making a film that was perceived as insulting to Islam.

"We went into this knowing this was probably going to happen," Klein said.

So much media manipulation. Who exactly gets $5 million to make a "You Tube video" (as it's being classified), anyway?
Top

And this New York Times article coyly references a typically oh-so-convenient image with only a link:

In Italy, the Web site of the newspaper Corriere della Sera showed images of what it said was the American Consulate in Benghazi ablaze with men carrying automatic rifles and waving V-for-victory signs, silhouetted against the burning buildings. One photograph showed a man closely resembling Mr. Stevens apparently unconscious, his face seeming to be smudged with smoke and his eyes closed.

Which is found on various Arabic language sites, e.g. 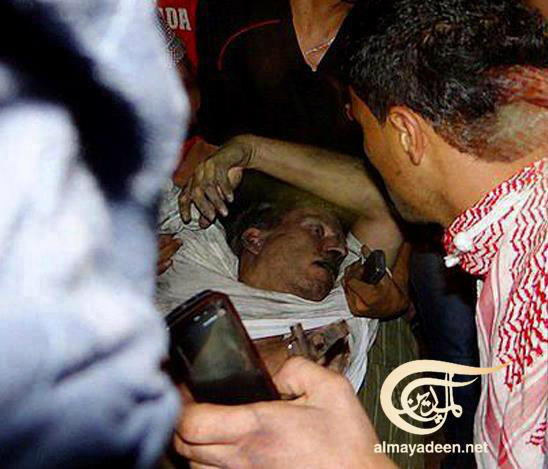 And, surprise-surprise "Sam Bacile" is now a psuedonym. Which of course means he probably doesn't exist at all.


Earlier press reports quoting a Sam Bacile, who identified himself as the filmmaker of “Innocence of Muslims” in interviews with the Wall Street Journal and the Associated Press, couldn’t be verified by Bloomberg News.

The actual filmmaker fears for his life, and that is why he falsely told reporters he was an Israeli-American named Sam Bacile, according to another man who said he was a consultant to the movie.

“It’s a pseudonym,” Steve Klein, a Southern California insurance salesman and anti-Islamic activist who says he advised the filmmaker on finding actors, said in a telephone interview from his office in Hemet. “This guy’s terrified. He’s gone underground.”

I hadn't been paying much attention to this "muhammed movie sparks outrage across middle east and causes deaths (american embassy workers) and protests..." headline until today. But because of an interview on gawker with one of the supposed actresses in the film. (Another mini related story to the main headline that reeks of further media manipulation...), I decided to check into what this whole shebang was about.

Thoughts so far...the story as reported by media, which then becomes the official story, has so many holes in logic that you would think anyone who actually listens or reads these stories with half a brain would call Bullshit. So we are supposed to swallow the story that "islamic radicals" or how about "those just plain crazy muslims/arabs who are ignited into violence at even the slightest of provocation" saw this (the jokes on you) youtube trailer on Egyptian tv (because they would really show that shit on egyptian tv...not) and then within a day?? coordinated and executed successful attacks on embassies that just so happen to be in 3 countries that the US/Mossad have most F&*#$ed with lately (and therefore wouldn't they logically, or wouldn't all US embassies located in muslim nations, have the tightest security??) all due to their "righteous jihadist rage" (aka, "crazy violent muslim rage that lacks all rational and cannot be stopped or subdued..."

Um no. So I have several theories so far...
It is all media perpetuated fakery in collusion with government. There were no real embassy attacks. There is no real Chris Stevenson. The whole story is a fraud from start to finish and the only tangible real product is a (the jokes on you) youtube produced trailer of a supposed anti-islamic movie that was made/produced several years ago, but actually doesn't exist beyond this (the jokes on you) youtube trailer.

Or, there were attacks on embassies, there were people killed, Chris Stevenson is real and now really dead, and it was all planned and coordinated by Israeli mossad, along with this youtube trailer and the jewish/israeli owned US media is playing the story as dictated by their "real" owners.

The ultimate goal? Either way, I believe that there really are Israeli interests behind this whole media event (so the part of the story where it's interjected that Sam Bacile is an Israeli real estate mogul, is interjected as a part of the psyop...as in a "See, Israeli's aren't part of it because the pronoucnement so loudly of their participation it, means that it's a smokescreen used by xyz to further provoke those jewhating easily provoikked muslisin" suggests that they eally are a part of it) in order to extend/confirm/pronounce ongoing storylines that fit their interests - These storylines and/or myths include: "Muslims are crazy, irrational, angry and violent and easily provoked into violence by things that "normal" people wouldn't give a second glance to." This storyline is accentuated by being released right on/around 9/11, to further confirm that idea into the braindead public's heads that are swallowing these stories/headlines without second thought, and ultimately, this storyline serves Israeli interests in creating more wars/wreaking more havoc upon their arab neighbors and particularly gives them more ammunition towards staritng a war with Iran...
Top

I'd like to add a link to an article by someone who's got the right idea about this whole Sam Bacile movie BS:


Whatever it is, any real Muslim looking at this thing would simply laugh at the stupidity and the obvious propaganda of it. Hell, they might even feel sorry for the talentless hack who made it and the wannabe actors who suffered through it. They damn sure wouldn’t riot over amateur crap like this. So, who’s over there pretending to riot and why are they really doing it?

That's the question - or maybe a better question is - is there an "over there" or an "anyone" even pretending to riot about this or is it all just media manipulation/fakery?

Here are a couple photos of a supposed protests in support of those that were supposedly killed: I especially like the last photo of the "support for the fallen" protesters and that man with the "Pehavior" and "Profit" sign and how he is facing a completely diff direction than everyone else in the photo. Also notice how they must have had a discount on red and blue markers recently...Or is that just a coordinated effort by these muslims to show their support for america (red, white, blue)...

Oh and check this out, Mr. Sam Bassel/Bacile (Sambacile/Imbicile?) who we are supposed to believe exists in one form or other (as Nakoula Basseley Nakoula - egyptian coptic christian CHECK THIS PIC OUT.

Notice how in this pic it is now a little boy holding the sign with the poor spelling of Behavior and Prophet: