guivre wrote:Get ready for 20-30 years of follow ups on this guy -- whatever the story construction is -- being fitted for space age prosthesis ala Oscar Pistorius. Jeff "Boom-Boom" Bauman.


BOSTON — When Jeff Bauman woke up in a hospital bed on Tuesday, an air tube was down his throat, both of his legs had been amputated at the knee, and his father was by his side. He tried to talk, but he could not.

Jeff and Csilla Bauman at the medical center where the younger Jeff was recovering from a double amputation. More Photos »
He looked angry, as he motioned his arms up and out like shock waves and mouthed: “Boom! Boom!”

So, according to that, "Jeff Bauman" is at Boston Medical Center. More details about "Jeff Bauman Jr., of Chelmsford, Mass" is in this International Business Times story http://www.ibtimes.com/meet-jeff-bauman ... on-1196493#

Although the pic caption implies Jeff Jr has a Facebook page, only the "father's" one exists:

Funny thing is, the supposed father's page has the sons & daughter listed but with FB pages only "pending":

Seems to have been a last minute afterthought

Any Boston sleuths want to check out the hospital?

Here''s an amateur youtube video showing that there is [st]NO DAMAGE TO THE LENSCRAFTERS BUILDING AFTER THE EXPLOSION![/st] (My mistake, there are 2 lenscrafters units to this building)


This is an image 6 seconds after the "bomb" went off. Where is the broken glass and "Le Crafters"? Wow.

Rudy Algera wrote:If limbs were blown off, would there not be pictures of scattered disembodied arms or legs -- chunks of human flesh? Or would these simply disintegrate into minute particles by the blast and become invisible? Where are the blown off knees and feet of the legless man in the wheel chair?

Yeah, with all the supposed "missing limbs" you'd think we'd get a few more photos of badly-mangled people...considering it's suddenly "okay" to do so (i.e. we didn't get any gruesome photos of 9/11 or other "disasters")

no, all we get are these few "iconic" photos. Boy, they sure do like that word "iconic" this time around, don't they?

[ADMIN: Houdini, do not use 150 size font for no reason. Your posts' text sizes have been reduced to normal. -hp]
Top

When one is filming, be it digital or video camera or iPhone - when a bomb explodes, one would think the natural reaction would be to let go of said device and get the heck of wherever you are.

Picture the scene. Leaning forward, filming an event when BOOM! - Person jolts forth / forced forward / ducks / but would surely release whatever it was in their grip due to shock / surprise.

You've dropped the video device and it wouldn't be the first thought to search the ground and retrieve it, after all, it has either been dropped over the fencing or is being kicked or trampled on by the hundreds around you who are fleeing.

But no, that would be real life. Every motion looks to me like somebody earlier on has said '..and... action!'

And if they don't say it, then another whatever symbol was done. Thing with an event like this, you have a year to plan and put it into action.
Top

Maat wrote: So, according to that, "Jeff Bauman" is at Boston Medical Center. More details about "Jeff Bauman Jr., of Chelmsford, Mass" is in this International Business Times story http://www.ibtimes.com/meet-jeff-bauman ... on-1196493#

I'm really curious about those amputation points. Looking at that other photo, if we are to humor it as an actual wound, I can't imagine they would be able to keep the knee portions. The eventual "stump" is extremely important for prosthetic fitting later:

I see this story as more cartoony by the minute, kind of fitting the general public's idea of what an amputee should look like.
Top

As a medical practitioner of 25 years experience, these pictures of "gore" are pure Hollywood props. The same blood and limb amputation memes are seen in recent Hollywood releases e.g. "Small Apartments" 2012 (Franklin dismembers his landlords corpse). Speaking with a WWII veteran about the explosion yesterday afternoon, the Veteran himself said the white smoke was not a convincing bomb. This is a pure and simple disaster exercise- made to cover the collapse of gold/silver perhaps?

The most disturbing aspect of the last few days is seeing the Perth Mint cleared of all silver bullion coins and bullion bars!
Top

Maat wrote: So, according to that, "Jeff Bauman" is at Boston Medical Center. More details about "Jeff Bauman Jr., of Chelmsford, Mass" is in this International Business Times story http://www.ibtimes.com/meet-jeff-bauman ... on-1196493#

I'm really curious about those amputation points. Looking at that other photo, if we are to humor it as an actual wound, I can't imagine they would be able to keep the knee portions. The eventual "stump" is extremely important for prosthetic fitting later:

I see this story as more cartoony by the minute, kind of fitting the general public's idea of what an amputee should look like.

Oh yes, I was thinking about that amputation "at the knees" part too, more for the ultimate convenience of the story if they intend to have this one as an acting sim-survivor. Never mind that the silly images depicted his right leg missing above the knee

but it would be so easy to act as someone with lower leg prosthetics. They have one acting as half-brained with Giffy Gabs

I'm still fascinated how these "bombs" were so precisely directional, the blast only shot shrapnel thigh high?

Odd: When I checked a couple hours ago the CNN site said a suspect was arrested but just now when I checked again they're saying no one has been arrested.

But, I found another version of the Super Cops photo ... 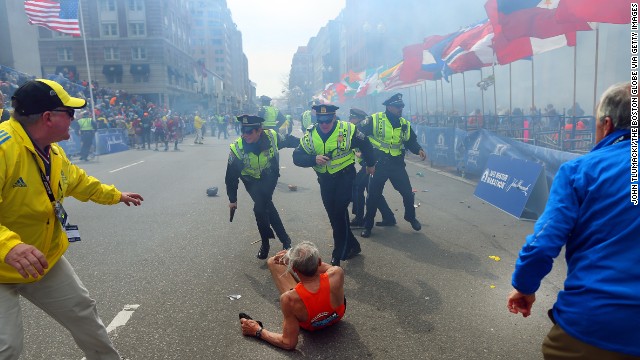 ... this one including some Super Spectators poised for action.

upstream wrote:Here''s an amateur youtube video showing that there is [st]NO DAMAGE TO THE LENSCRAFTERS BUILDING AFTER THE EXPLOSION![/st] (My mistake, there are 2 lenscrafters units to this building)


This is an image 6 seconds after the "bomb" went off. Where is the broken glass and "Le Crafters"? Wow.

Actually, there are 2 lenscrafters displays, I think I'm wrong here. Disregard for now.

Point number 2: In this video the blast occurs at 1 minute and two seconds. Where did the filmer find a salad spinner to place his camera in for a full 60 seconds? Are we to assume that the blast was so violent that this mans hands (or the ground) shook violently and rapidly for a full minute without slowing down. Was the area hit with a 8.5 richter scale earthquake? We are looking at an explosion that BARELY knocked over an octogenarian while those around him did not so much as stumble.

Point number 3: What happened to the guy who starred in this video? He seemed to be an official, of sorts,announcing the names of the runners as they crossed the finish line.I wonder why he took no other photos. I also wonder about the sound. It seems as if it got pretty quiet. Considering this MFTV blast was in the midst of a huge crowd, how did it get as quiet as the putting green at the masters within a mere 30 seconds? Where did the people go? I would think that he was within earshot of dozens of people who, we are told, just had their limbs blown off.You would think that these people and those around would be screaming for at least a minute or two. You would also think that someone that close to the MFTV blast and those around the announcers bench,one of them would be able to get a decent picture or two.

Point number 4: Wouldn't an event like the Boston MArathon have a medical tent set up somewhere near the finish line? Where are this pictures of the medical team tending to all those injured folks, not to mention those dehydrated, muscle cramping, and blister footed, people who have just been running for the past 4 hours. Assuming it was close by,it was sure nice of those MFTV terrorists to plant their explosive devices so close to the medical tent. With a 26 mile course to work with they went out of their way to ensure that no injured would have to be transported more than a few yards to get medical attention . Those cunning MFTV terrorists also managed to ensure that this "not so explosive" device would create maximum smokescreen and be in a place where it was sure to captured on national television.

Point number 5: I wonder if its too late to apply for the job of a victim's relative? What is the going rate to buy someone' s cooperation in these MFTV casualty events? What are the penalty clauses that keep these actors from whistle blowing? (imprisonment? public humiliation? a cameo in the next MFTV event?.
In this case they would have a limited pool of available talent, how many amputees are there looking for this kind of work? I think I heard that as many as 20 people lost limbs as a result of this latest MFTV not so explosive blast.

lux wrote:Odd: When I checked a couple hours ago the CNN site said a suspect was arrested but just now when I checked again they're saying no one has been arrested.

Yes, in a real event that would certainly be odd. Psyops? Not so much.

Something weird going on above the American and Italian flags. 2 black squares suddenly appears.

I think it is Malaysian flag , can't notice these 2 squares ...

Mid screen, right at the top edge as the bomb goes off. They appear and disappear.

Nice call. It looks like two window openings bricked-up with cinder blocks switch to being windows at the moment of the explosion then switch back to being bricked-up. Perhaps the reverse was intended to happen so the windows turning grey could be explained as a reflection of the "smoke," thus giving credence that the "explosion" was real and that this video is an honest depiction of that event.

I guess this clip's animator zigged when he should have zagged.
Last edited by queuebert on Wed Apr 17, 2013 8:56 pm, edited 1 time in total.
Top That's the hand sign for "I love you" which you can verify via a quick Google Search.

THIS is the devil's horns: 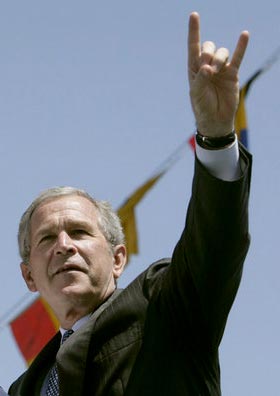 You learn something everyday.

As has already been pointed out, it's quite clear that the 'crime scene' was to be somewhat embellished after the event with extra gore and debris including this seemingly gratuitous bit of wanton vandalism against this innocent little table, seen behind 'man with green hat' ... ...hmm, maybe someone was short of firewood or something.
Top
Post Reply
1312 posts