Anything on the news and elsewhere in the media with evidence of digital manipulation, bogus story-lines and propaganda
Post Reply
First unread post • 152 posts 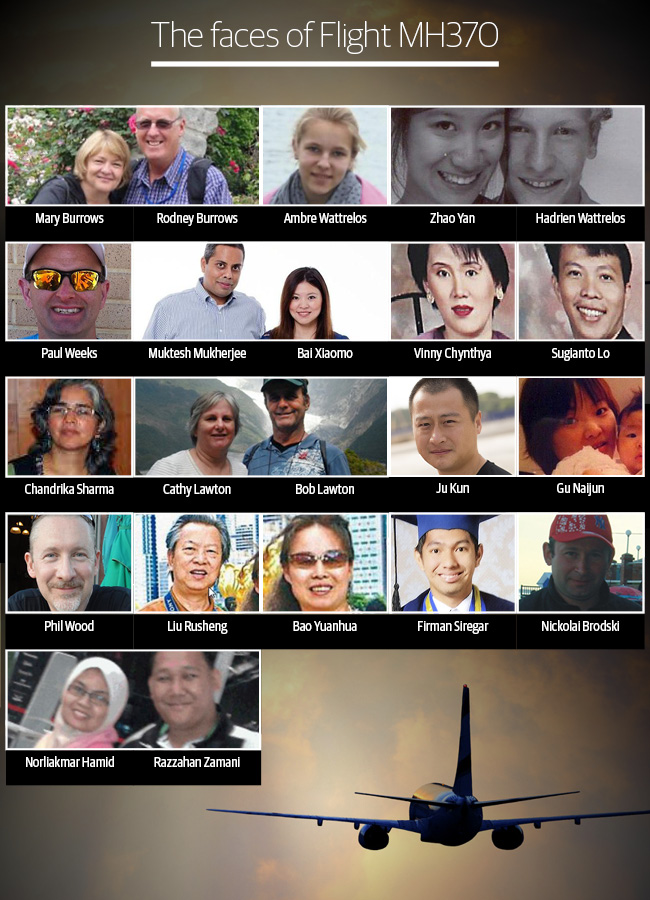 More dodgy pictures of the hapless passengers. Not many considering there were 239 passengers and it's been 10 days since the planes "disappearance".

The photos that jumped out at me were the Liu & Bao (mother/ daughter?) side by side shot .
It looks as if the daughter was cropped out of one photo, only to show up in the adjacent shot. The "mother" has obviously been pasted/ faux-to shopped in.

Correction: Upon further research and review it turns out that Liu Rusheng is not the mother, but possibly the father, or grandfather, of Bao Yuanhua. Liu is reported to be a famous artist/calligrapher born in 1937, and one of a group of 29 Chinese artists on the flight.

it makes one wonder why they could not come up with a photo of this famous 76 year old artist that wasn't cut and pasted.

You can read more on this fellow here: http://singaporeseen.stomp.com.sg/singa ... th-6-times

This Liu Rusheng entity was reported to be born in December 1937. If my math is correct that would make him 76 years old as of today, and he would not be turning 77 until December of this year (2014).

I have seen a number of articles with headlines that include mention of Liu and referring to him as being 77 years old.

Look at this link and count how many articles listed him as being 77 years old:
https://www.google.com/search?num=100&n ... H7qEMwZIF0

It is clearly a systematic pattern of the "perps" and "psyop-erators" to utilize the twin digits at every opportunity.

y0lked wrote:And here comes the fairy tale. The plane will be missing for "Weeks" what a coincidence.
http://www.perthnow.com.au/news/western ... 6855736956

Did the family agree to a happy photo shoot just after having to "grieve" about their missing family member? This one has it all. 9/11 and Air France references included.

Yeah spotted that last night. Maybe she's pumping for cash to have her botched face-job corrected. Could we have seen her previously I wonder?
Top

"Missing passengers Cathy and Rob Lawton pictured with their grandchildren." I may have missed something but I don't remember seeing any pictures or videos of the friends/relatives/loved ones waiting nervously or crying at the destination airport. They're always crying photoshop tears at home or crying at a press conference. Was nobody waiting to pick any of these passengers up? Similar to 9/11, nobody waiting, no special private area had been set aside for the non-existant relatives to wait in agony for news of their missing non-existant loved ones.
Top

"Missing passengers Cathy and Rob Lawton pictured with their grandchildren."

This is getting ridiculous. More blue and white stripes.
Top

brianv wrote:Yeah spotted that last night. Maybe she's pumping for cash to have her botched face-job corrected. Could we have seen her previously I wonder?

Brianv,
Her mouth does remind me of the Joker!
Top

Fairy tale indeed. I love how Danika found out about her husband - from a reporter!


About 10 minutes later, and around six hours after the first reports that MH370 had disappeared, the Perth mum received the devastating news from a journalist in New Zealand.

“The lady asked (me) if Paul Weeks was there and I said, ‘no, he is on his way to Mongolia’,” she explained.

“And she said, ‘when did you last speak to him?’ I told her that he emailed me from the airport lounge (in KL) and that was the last I heard from him. Then she said, ‘oh you don’t know’. And I said, ‘what is this all about?’

“She just said you need to ring the New Zealand Consulate, there’s been an incident.

HOW would the reporter know ahead of her that her husband was on that plane. And this was 6 hours after the first reports that the plane had disappeared!!! What's the tearful Danika been doing all this time?
Top

I'm still trying to figure out what the goal of this psyop is. It could just be a distraction but maybe it's about global management of air transportation.

"Teams from 26 countries are trying to find flight MH370, which went missing on 8 March with 239 people on board."

I don't know if others have noticed, but the number 26 comes up a lot in these things. It was all over the place during Sandy Hook and Boston "bombing".

"Sean Collier, 26, was shot multiple times in a late-night confrontation with..."
"Tamerlan Tsarnaev, the 26-year-old identified by police as the dead Boston bombing suspect..."
"Many of the over 260 people injured in the Boston Marathon bombings suffered complex wounds..."
Sandy Hook - 26 victims
Top

It's probably more about getting people/kids chipped with RFIDs.
Top

Nomination for Best Actress in an Airline Hoax goes to ... "Dry-Eyed Wailing Mother"

I just had CNN on and and they were of course talking about the "missing" plane. They were interviewing a NASA guy who discussed how these mini-satellites could have helped us find the missing plane as they take pictures constantly but they aren't quite there yet with technology. The company he mentioned was Planet Labs. If you scroll down, you can see photos of the "founders". They look pretty simmy to me. This is probably much like the bright young founder of Facebook. They want to make it appear that these are private companies created by young geniuses. Anyhow, this may be what this is really all about - gaining support and funding for satellites.