The notion of 'thousands of victims' was crucial to generate universal public outrage. However, having 3000 angry families breathing down their necks was never part of the perps' demented plan. Our ongoing analyses and investigations suggest that NO one died on 9/11.
Post Reply
First unread post • 27 posts

Brutal Metal wrote:I agree with omaxsteve there was a man named Ace Bailey that played for the Boston Bruins in the 70's, I watched him on TV 38 and saw him live for a number of games at the original Boston Garden. If that's the same guy that supposededly died on 911? I have no idea BUT a man name Ace Bailey existed! Hoi I'm liking your theory about a faked character representing him; Who knows the real Ace might be living in Greenland for all we know

I don't understand. If there was a real Ace Bailey, why the need for a "faked character representing him"?

In other news, talking about Baileys connected to 9/11:

Monica Bailey is a 40-year-old candy store manager and adult literacy teacher from Brooklyn, New York. She placed 3rd overall in the competition, being voted out in the final eviction by Nicole. During the show, it was revealed that Monica's cousin was missing after the 9/11 attack on the World Trade Center. Monica was told of the incident but not in detail. During Big Brother 3's Where Are They Now segment Monica did reveal that her cousin who she considered a sister [Tamitha] was never found. http://en.wikipedia.org/wiki/Big_Brother_2_%28U.S.%29

whatsgoingon wrote: I know this is obvious, but those first two images are exactly the same. They are the VicSim Trademark -- VicSim(TM). Anything else is speculation on this issue. Why on God's green earth are those images exactly the same more or less in pose and position?

whatsgoingon wrote: I know this is obvious, but those first two images are exactly the same. They are the VicSim Trademark -- VicSim(TM). Anything else is speculation on this issue. Why on God's green earth are those images exactly the same more or less in pose and position?

And here it is reversed: Identical lighting as far as I can tell...

And, of course, there is a "Bailey children foundation". Lots of pictures here: http://www.acebailey.org/ab_gal_fam.html
They look convincing too. However let's not forget that there are other cases of vicsims with lots of family pictures, especially when they have a foundation. For example: http://www.fredgabler.org/aboutfred.php
Top

whatsgoingon wrote:We of course can conclude Wayne Gretzky is in on the 9/11 fun. No surprise there I imagine.

Wayne Gretzky - and the WTC

Hmmm...well I found some 'surprising' things regarding Gretzky and...the World Trade Center (of all things). Apparently, he held a farewell party at Windows Of The World - where he was joined by his mate Ace Bailey:

"Gretzky and Bailey were roommates and became lifelong friends. When Gretzky retired, Bailey came to his farewell party, held at Windows Of The World, atop one of the towers."
http://www.ocregister.com/articles/bail ... etzky.html

How 'ironic' then that "Ace" Bailey ended up crashing into the WTC a while later, huh?...

Wayne Gretzky is also the only person on this planet to have had his initials glowing in the Twin Towers' façades!

The F.Y.I. column of Dec. 26 (''No Secret Code'') quoted a Port Authority spokesman as saying, ''I never heard of a successful effort to spell out anything'' with lighted windows in the World Trade Center.

On the evening of Wayne Gretzky's retirement this fall, some enterprising sports fans, who no doubt work in the building, were able to light the Trade Center windows with letters. There were a W and a G spelled out in the north-facing windows of the Twin Towers, W in One World Trade Center and G in Two World Trade Center.

The letters were up for about a month, and then the W disappeared. Even tonight, you can see the remnants of the G in 2 World Trade, which could also look like the bottom of a 6. You don't require imagination to see the letters, just a southern exposure and a clear view of the Twin Towers.

"SOME ENTERPRISING SPORTS FANS WORKING IN WTC" pulled this stunt off ???? 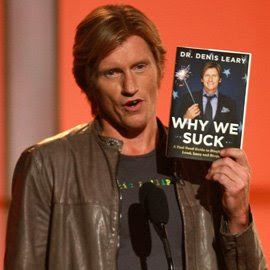 *cough*cough*...Denis Leary? Really? How does our old pal Denis relate to Ace Bailey and Wayne Gretzky?
>>>>>our DENIS LEARY thread is here.

Well, on "Ace" Bailey's Wickedpedia page, we learn that...


Denis Leary wore a Bailey memorial T-shirt as the character Tommy Gavin in the season 1 episode "Immortal" and the fourth season episode "Pussified" in the TV series Rescue Me.
http://en.wikipedia.org/wiki/Garnet_Bailey

Then, I found that Wayne Gretzky and Denis Leary are "co-stars" in a 2006 Hockey DVD:

Did "Ace Bailey" own property in the 1980's and 1990's? Appraisals and tax rolls are public records. To "flesh out" an individual, important data needed includes location and date of birth together with last known legal address. Without investigating these thoroughly one ponders only confusing and misleading pics and narratives. In themselves, these are highly suspect to rational
persons and result in unending speculation.

If "Ace Bailey" was really a pro hockey player in the 70's, hockey fans need to identify former teammates who can be found and interviewed. The odds are that they now believe that their old teammate perished on 911. Show them the Gretzky/Leary 2006 hockey DVD and ask them if it is possible that "Dr. Leary" might be their old pal. They may have information about "Ace" dating to the time they knew him. Is it significant Gretzky has, over the years, been close to both "Ace Bailey" and "Dr. Denis Leary"?

"Ace Bailey" was chosen to be a Vicsim because the perps knew something about him that enabled him to fit their story. What was his educational background? What field did "Ace" enter following his sports career?
Top

I didn't say an "Ace" character was manufactured Hoi, BUT I do know a person by that name played for the Bruins in the 70's, I'm agreeing with omaxsteve on that regard. I started playing pond hockey in Mass in 1972 when I was 6 and progressed to pee wee through to high school, it was my most loved sport as a kid, I watched every game that was televised, kept up with the daily stats in the Boston Globe. That's all I can add so I won't be commenting on that photo analysis of his hockey cards..
Top

Brutal Metal wrote:I didn't say an "Ace" character was manufactured Hoi, BUT I do know a person by that name played for the Bruins in the 70's, I'm agreeing with omaxsteve on that regard. I started playing pond hockey in Mass in 1972 when I was 6 and progressed to pee wee through to high school, it was my most loved sport as a kid, I watched every game that was televised, kept up with the daily stats in the Boston Globe. That's all I can add so I won't be commenting on that photo analysis of his hockey cards..

Why doesn't somebody call to his house or call him on the phone?
Top

hoi.polloi wrote:There are more pictures of him than of the average vicsim. I still say "synthetic" plus maybe some room for a sportsperson with the codename given "Ace Bailey" until we truly have collected all his info and can determine if it's a legit "normal" person or not.

It seems simple enough to have sportsmen with code names to eventually be used in psy-ops. They do it with news anchors that people watch every day. Why not with sportspeople?

You could make an NHL hockey player into a spook, but you couldn't make a spook into an NHL hockey player. They're drafted when they're teens, after having played in the junior leagues for some time, and demonstrated professional ability. That's not the case with a news anchor. You could make a spook into a news anchor, or vice-versa. News anchors aren't recruited from pools of teenage news anchor teams. Give your man some voice training, and you're good to go.

If you're theorizing that there was no hockey player going by that name, and the entire thing is simulated like the other vicsims, then I'd say the logistics behind doing that would actually be much harder than pulling off the rest of the 9/11 operation, combined. He got inducted into the Hockey Hall of Fame in 1975 and scored at least one winning game in a Stanley Cup Finals match, and played for over a decade on a variety of teams. If none of that really happened - how did they induct someone who didn't exist into the Hall of Fame with nobody noticing? How did they fake the games he played in, the goals he scored, all in front of live audiences? Without holographs, animatronics, or digital editing (since it's the 70s)?

I would have to say that Garnet Bailey really did exist as an NHL player, on the evidence. Hundreds of thousands of people have seen him in the flesh, consistently and over a period of many years. He could've been a criminal or spook or whatever too, but I don't like to theorize. It's flimsy and/or missing evidence and wild leaps of logic without any connecting dots that led me to doubt the official story and to believe nothing that isn't proven. On the evidence that I see, Garnet Bailey was a real hockey player who is now a missing person - since there isn't any evidence that places him as a murder victim on a plane. Until things like airport security cameras and passenger manifests (authentic documents issued by the airport, not just an unsourced list of names) can place him as having boarded and taken off in the plane he is alleged to have died on, it's pure speculation to say he did, or to make any other statement as to his whereabouts.
Top For those who have problems accepting that ALL the 9/11 victims were fictitious identities created by a digital computer database, here's a man we may contact for insights into alternative methods of Vicsim creation.

I think that this "passenger" is not a simulation - it's a simulacrum. Subtle but distinct difference.
Top
Post Reply
27 posts