Nope, folks...the "jumper" images are all squeaky real! What we saw falling from the towers were latex dummies:

Good Heavens... the lengths to which some folks will go to legitimate the 9/11 imagery are quite extraordinarily silly. Or 'dummy', I should say.
Top

We are going to blow this building to dust in a few minutes up guys, will you spread out on the different floors all the way up to the top and throw these Latex Dummies out the windows! I imagine the answer would be something like - "Like fuck we will!"

The latex dummies were given another task instead - Populate the Letsroll Forum!
Top

Did Cy Twombly sketch that shit?

Computer animation and video editing are probably the key understandings for the public to understand if they are to grasp the various softwares used to fake the 9/11 media.

For a while I was wondering how they did the smoke speeding up - slowing down - speeding up - reversing - etc. until we suggested that what they are doing (for some of the videos - mainly the morning broadcasts and their various offspring) is an automatic 'tweening' program.

How that works is it renders a number of necessary frames that exist between two 'key frames' or 'extremes' that are drawn for the computer to fill the rest in. They didn't keep track of the timing so the smoke just dances around in bizarre ways - esp. changing speeds with visible tufts that you can trace moving across the screen.

This looks like straight-up key frame animation with no tweening - or a 3D model given inadequate pixel frame - or a writhing figure on blue screen - anyway shrunk down to tiny size and well, ending up just like "bad drawing[s]" as you so perfectly suggested.
Top

Yes, it could be like that - "28 frames" or "280 frames" - or there is another odd possibility ... that they were able to slow down or speed up the animation on live TV to account for the buildings getting taken down.

However, that was only suggested before because we were gawking at just how awful some of the animation looked - how unlike real 'natural' video - so "maybe they sacrificed some quality for high render speed for live rendering" but ultimately, there may have just been pre-created video while the anchors hid inside bunkers in case the 9/11 story didn't pass for some reason. haha

If you mean "manjana" as in "where were you?" as in we were supposed to be meeting somewhere, I admit I am a bit confused. I've only ever talked to you on this forum. Don't buy any e-mails or skype or anything that claim to be coming from me - they ain't me!
Top

What an impressive leap out of the window it must have been - he's still moving away from the tower as he nears the ground!

I assume when he hit the floor he did 3 forward somersaults before standing up with his arms in the air to receive the rapturous applause from the CGI audience and to cries of "Holy shit" and "Oh my God"!

You know, now that you mention it, the 9/11 movie is directed so badly, I would believe it if we found out Lucas was the lead creative.
Top

(Acronym for the Lucas organization Industrial Light and Magic for those who didn't know.)
Top 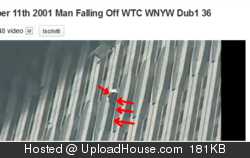 What to me is interesting in these "umping people" videos, that you can't see any firefighter or random people running out of towers and around.
Top

Firstly. Reel Deal, may I congratulate you on your work on here, it's always a pleasure to view your work, however, I think you give too much credit when you summise that the black figure we see falling in the clip above is a real person in a wind tunnel! I'm intrigued that this falling, morphing shape should cast a shadow when the smoke doesn't.

Last weekend I was watching after several years the movie Animatrix (2003).

Try to imagine my surprise when I saw this scene... What do you think, any similarity?

http://www.youtube.com/watch?v=W2iVhlUoZx0 (watch at 7:55)
(I have left a little comment under that video - please choose option A, B or C and lemme know ! )

THE EXECUTIVE-CHUTE
I bet you'd never thought the "jumper myth" could nurture yet another, 9/11-related money-making scheme. Think again, folks:

http://www.probe.org/site/c.fdKEIMNsEoG ... medies.htm
"Work in a high-rise? Have you considered a personal parachute? It comes in two models: the streamlined Executive Chute and the deluxe "HOPE" system (High Office Parachute Escape; opens automatically, good from heights over 100 feet, accommodates persons up to 300 pounds)."

http://www.csmonitor.com/2005/1025/p03s ... planetizen
"Down at the Safer America store in midtown Manhattan, the "high-rise kit" with the Executive-Chute - an escape parachute for skyscrapers - sells for about $1,000. The high-rise parachute kit is not the store's bestseller - not close, says its manager. But some buy it.

Since 9/11 and the collapse of the World Trade Center, business executives, architects, engineers, and safety experts have worked to find safer ways to evacuate skyscrapers, focusing mostly on improving stairwells and elevators. But on the fringes of this effort is a raft of what are called "last-resort" devices like the Executive-Chute, intended for people who might otherwise be trapped by blocked stairwells or inoperable elevators."

Gee - I wonder if it also works for 2 jumpers holding hands? Reel.deal - thanks for just more observations that the whole 'live on TV' show is just a movie - an animation made long prior 911 2001.
Just look at the smoke coming out from the unbroken windows above/below, etc. You really wonder where it comes from? It seems the animators think escaping smoke adds to drama.
Top
Post Reply
241 posts